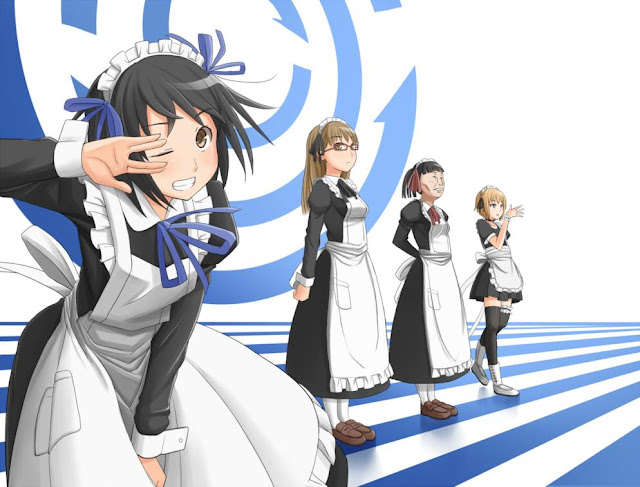 Summary: Arashiyama is a mystery obsessed clumsy girl who works for an old woman’s less than stellar maid cafe. The only regulars to the cafe are the other entrepreneurs from the surrounding shopping district and Sanada, one of Arashiyama’s classmates who has a crush on her. When Tatsuno, Arashiyama’s friend, is invited to the cafe and sees the poor state the cafe is in she decides to work alongside her friend and fix things up. 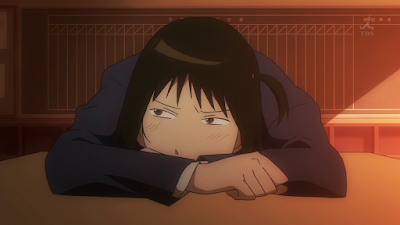 Review: The style of Soredemo Machi wa Mawatteiru, SoreMachi for short, is what stands out immediately. Animated by Shaft and directed by Akiyuki Shinbou (Bakemonogatari, Arakawa Under the Bridge) the look and feel of the show doesn’t seem to lend itself well to a Slice of Life comedy, but SoreMachi is not your standard Slice of life, while there are some shorts that focus on Arashiyama and her daily life the more interesting bits come from focus on the odd characters in the town where she lives. There is no set formula to a single episode of the show which allows the narrative to use whatever time and techniques are required to tell the story. Too make the genre even vaguer, interspersed between the normal slice of life scenes are also stories containing time travelers, aliens, and the afterlife.

The content, however, is mostly standard Slice of Life fair presented in a way that makes it appear fresh and innovative. Having no constant structure, the arts style, the masterful direction and the science fiction elements sprinkled about make the shows content seem far more aspiring than it really is. I don’t want to disparage the show in anyway, as I am a huge fan of slice of life comedies and the writing and wit of SoreMachi is unique among them but when boiled down to its core SoreMachi is a hyper-stylized, well written way of telling a story about a group of girls working at a maid cafe or a group of girls becoming obsessed with an odd vending machine. The animation style and the direction of Akiyuki Shinbou is what stand out. The direction gives ordinary scenes, such as Arashiyama sitting in class receiving extra lessons, an epic feel. The art is a bit odd, lifted entirely from Masakazu Ishiguro’s manga, and gives the characters a distinct personality the instant you look at them. 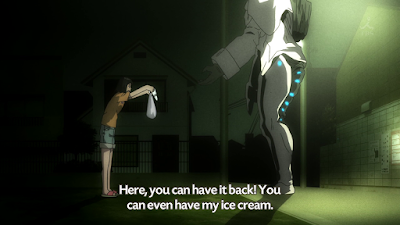 The comedy writing is the heart and soul of the series. The humor plays off character personalities and antics as they interact with their surrounding town and its insane inhabitants. Long scenes of dialogue are fast flying and exciting due to the underlying theme of mystery, small conversations become over-complicated and fun by adding in an element that needs to be deduced. Even the jokes are tiny puzzles which are funnier if the viewer unravels them before the punch line is revealed. One such joke sees Arashiyama rushing to class fearing that she is late. She bursts into the classroom and is relieved because no one else is there. A keen observer can figure out the joke before the teacher reveals it because there is only one desk set out in front of him and she is, indeed, late. The science fiction elements of the series work because they are played completely straight, as these scenes are not separate from the slice of life aspects. After the few supernatural scenes the audience is left with no choice other than to believe that these supernatural elements really exist in the world of SoreMachi.

The soul of the show lies in how well the individual stories are able to come together. The stories go between the absolutely mundane to the completely insane with a few that explore some deep concepts while maintaining the series general light tone. One short feature’s Arashiyama’s younger brother being unable to sleep, so they take a walk together through the town. The piece explores how nighttime causes landscapes, environments, and even people to change. Going by the normally quiet maid cafe Arashiyama sees the characters from the shopping district up late drinking and partying with the old woman leading the festivities. The exploration of the darkened town is aided by Shaft’s excellent animation which helps turn something that is seemingly mundane into a meaningful and deep experience. The day ends with Brother and Sister sharing a bath together and growing a little closer now that he has been introduced to a completely new world. 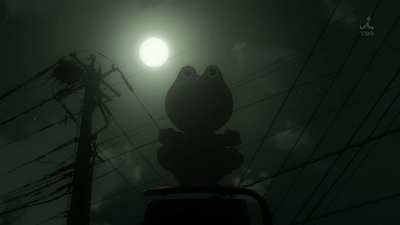 Like many anime these days SoreMachi features a ton of Meta-humor. Instead of playing it to placate the Otaku crowd the tone is vicious. The concept itself sees the characters at a mock maid cafe; the set up itself is taking a common trope and exploiting it for humor. The world of SoreMachi is filled with familiar elements slightly twisted to make a subtle satire. For example, Arashiyama and friends even form their own girl band but instead of the standard rock set the band features a bass guitar, drums, a violin, and an accordion. SoreMachi is the generic gag anime slightly twisted in order to make fun of gag anime.

SoreMachi isn’t a perfect series; the strange format, animation style, and direction is going to turn off people looking for a light gag anime because it makes the series look far more intimidating than it really is and while I consider that a bonus I can easily see why that would cause others to panic and turn away. The long scenes of dialogue, which still work when translated on some levels, are obviously filled with puns and other elements of the Japanese language that cannot be translated to English. Reading footnotes while a joke is going on doesn’t make the joke funny, it makes the process tedious. 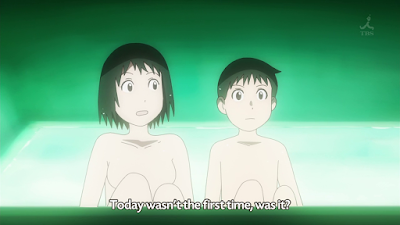 Verdict: SoreMachi is a visually innovative and witty slice of life anime. The animation and direction propel what would be an average comedy series into a uniquely powerful piece that appears insightful beyond its content. At the core it is a well written comedy that has a well exploited mystery theme running through most of the jokes, plus its ability to portray Science Fiction elements in a deadpan slice of life tone brings an odd twist to this extremely enjoyable show.

Direction and Animation are above and beyond expectations

Writing is intelligent, witty, and offers some new twists to the slice of life genre

Some jokes do not translate into English well.