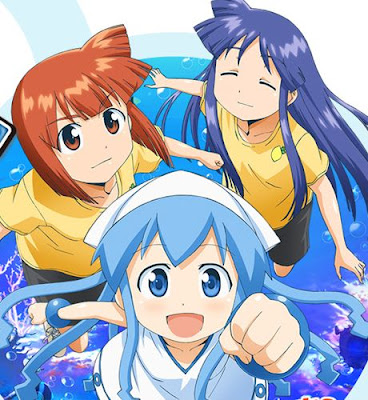 Summary: Squid Girl has come to the land from the depths of the sea to conquer humanity for its pollution of the ocean. Unfortunately she ruins the first house she uses as an invasion base and has to work to pay for repairs. Of course, she can’t overcome the Aizawa sisters who manage the house, so who knows whether she can subjugate humankind. Review: Nothing is more subjective than humor and humor is difficult to describe in a review, especially humor that so heavily relays on visual gags. So, while it is difficult to explain the humor and charm of Squid Girl, the show is a unique change of pace from many modern anime comedies that I have to try. The humor of Squid Girl mostly comes from exploring how a Squid’s natural abilities would manifest themselves in a human form; Spit ink; tentacles; bioluminescence; wherever those flappy things are on her head;  the concept is so bizarre and that alone creates a compelling character to follow as she attempts to fit in on the surface world. Squid Girl also has to learn all about human society from celebrating birthday parties to how to make friends. Her exploration of the human world with a general inability to conceive of and adapt to even the most basic of concepts allow the jokes to flow naturally. The concept of a Squid taking human form to come to the surface never feels contrived because it is treated straight by the characters. 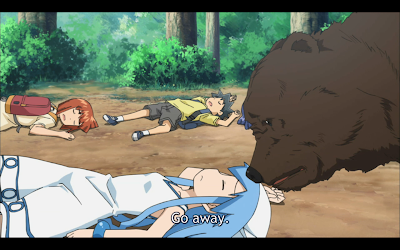 The supporting cast plays a large role in the humor of the series, but really they exist to place Squid Girl into situations where she has to react and confront a problem in a “squidly” manner. There is Sanae who develops an obsessive crush on Squid Girl, Cindy Campbell a US researcher who believes Squid Girl to be an alien, Chizuru who is a seemingly sweet girl until made angry, and Nagisa who is employed by the cafe and becomes terrified by the invader from the sea; a fact which Squid Girl couldn’t be happier with. Each character represents a single gag and when they appear a variant of that joke immediately happens, the writing is clever and each encounter is varied enough to hide repetition. While the characters are funny on their own the real joy is when they interact with Squid Girl. Squid Girl is unable to adapt to simple concepts so when she is faced with an absolutely mad group of people she doesn’t quite know how to process it, and the show continuously tosses wild elements at each other and just how they react. The result most is bizarre confrontations that are played as charming and humorous.

The balance for Squid Girl comes from the owner of the cafe, Eiko Aizawa, who plays the straight man of the series. For the most part, she is completely unimpressed by the majority of Squid Girl’s powers and starts their relationship off by lecturing Squid Girl for putting a hole in her wall. From there Eiko introduces and explains concepts of the surface world to Squid Girl and helps her to adjust to her new environment. At best she shows mild annoyance at Squid Girl’s continued attempts to conquer the world and the insane cast of characters who come to disrupt business at the cafe in order to see Squid Girl. Eiko’s role as straight man supplies a solid anchor from which the bizarre characters can be compared to, which becomes a launching point for best humor of the series. Eiko and Squid Girl create a fantastic team. 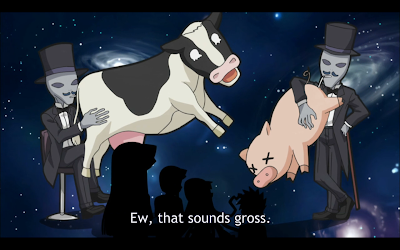 There are moments when Squid Girl breaks out from its normal mold and creates some creative pieces of work. One short features an alternate world where Eiko finds a mini Squid Girl and keeps her as a pet. The episode contains some adorable sequences of mini-Squid Girl chasing around Eiko’s fingers and Mini-Squid Girl rolling up a tiny snowball. Mini-Squid Girl becomes a lifelong companion to Eiko in a surprisingly touching sequence that shows Squid Girl remaining the same while Eiko ages and ultimately dies, leaving behind her friend to morn her death. The short comes as a total shock and is a brief example of the potential such a loose form comedy series has. There are a few more of these off structure episodes sprinkled throughout the series and it helped to break up the format to keep things fresh, to keep the audience guessing at what the show was going to throw at them next.

The art is standard modern animation of high quality. It’s fairly generic with Squid Girl herself being a cute Moe girl and some of the lesser characters falling on cliché styles, such as the blond haired bikini wearing design for American born Cindy Campbel, but there are little bits of details that add some unique traits to the characters. Squid Girl herself has a fantastic design for a squid turned Moe girl with the tentacle hair and squid hat. Even more subtle is the slightly tanned appearance of Eiko and her sister, logical since they work on the beach all day, but Eiko’s legs have a muscular look to them which is rare to see in a medium that favors smooth limbs on idealized females and again, this is a logical trait to include in someone working on their feet all day cooking and serving customers. So while the art is attempting to appeal to the standard Otaku it isn’t without a subtle stroke of character depth. 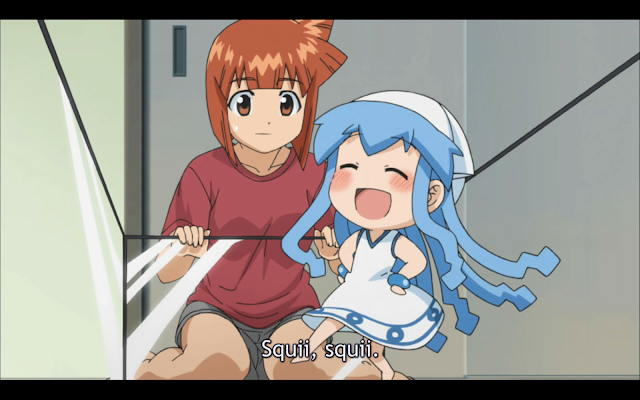 The final episode of the series attempted to cap it off with an emotional ending as Squid Girl loses her powers and leaves the tea house. It feels artificial and contrived, even as a person who has become a huge fan of the show and fallen absolutely in love with Squid Girl I wasn’t at all emotionally moved by Squid Girl leaving because it was obvious she was going to come back. I understand the need to have a neat ending to close the series but by dedicating two thirds of an episode to such an obvious plot line the only thing they accomplished was admitting they couldn’t write an effective ending to the show. They should have stayed the course and produced two high quality shorts, as we have come to expect, instead of such an obvious ploy for closure.

Verdict: While the initial premise seemed like a set up for a silly Moe show, Squid Girl turned into an intelligent. The cast of characters, especially the excellent straight man of Eiko, kept the humor strong, if a bit repetitive, throughout the series. While the ending was a bit contrived that really doesn’t matter considering Squid Girl is just a loose collection of shorts anyway. It is hard not to like Squid Girl, the cute characters and bizarre nature of the show creates something truly unique.

– Bizarre and cute combine to create a unique experience and feel.

– Some innovative gems are hidden among the standard episodes.

– Ending is contrived only to put an end cap on the series.