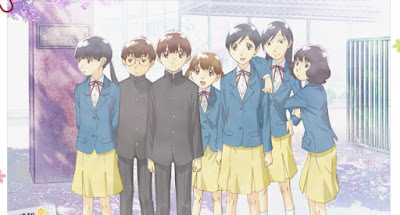 In Japanese Animation, there is no more played out genre than the High School drama. While most become comedies or sentimental romances Wandering Son turns away from the cliché and captures an element of 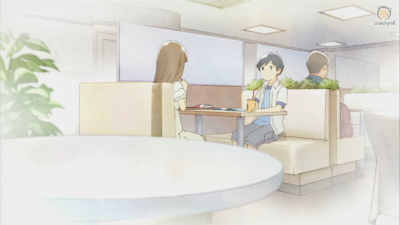 adolescence that is rarely explored in the medium: gender identity. While initially turned off by the show’s premise it was quickly apparent that Wandering Son didn’t have any agenda to force on the audience but rather it wanted to show characters exploring gender in a genuine, realistic way and it accomplished its goal with style. Shuicihi Nitori is a boy who wants to be a girl, and Yoshino Takatsuki, a girl who wants to be a boy. The story picks up with the two entering middle-school and shortly after Nitori’s confession of love was turned down by Takatsuki.

The first episode is impressive in the way the narrative establishes relationships with minimal effort. The interactions of the characters define a base from which the audience needs to understand the relationships, and the relationships of the show are complex so any help is appreciated. An early scene has Nitori’s sister sliding him an extra piece of shrimp at dinner as a silent way to make up for a fight that morning, the subtle gesture feels like a natural way an elder sister would make up with her younger, weird brother. She is too proud to say anything but loves him too much to have him stay mad at her. The show is sprinkled with beautiful moments like this which make the relationships in the show a joy to watch develop. 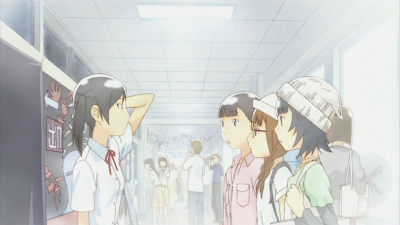 Wandering Son takes its time, it is slow and methodical, yet doesn’t waste a second of screen time without a character making a choice that will affect the relationships around him. In the middle of the show there is even a play staged which takes on the classic device of a play within a play. The play serves as a way for the gender confused characters to act out their desires, not in private but to show it to the world and not be judged negatively by their peers. Appearance plays a lot into the central theme of the show, and the way one appears to their peers is defining to kids at their age. This theme is why I think there is a powerful story about any adolescence discovering themselves and not just transgenderism, as it has been labeled. The eccentric Chizuru comes to school on the first day in a boy’s uniform and that simple act shocks the children, which makes Chizuru instantly popular. For Nitori and Takatsuki, what Chizuru did was more meaningful than a ploy to standout they saw in her what they always wanted to do; to ignore social rules and dress how they wanted. Costumes and gender roles are intertwined and displayed in Wandering Son in a beautiful way which comments on social standards as well as individual emotional states. 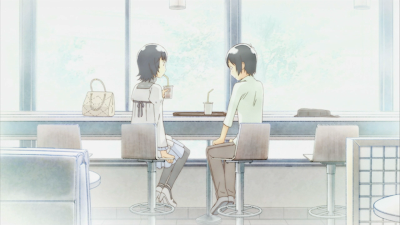 Anime tells takes place right in the middle of the series after an intense arc. Episodes 2 and 3 are spent resolving a conflict that happened off screen and thus has no meaning to the new audience coming into the anime. While the art of Wandering Son is unique, the water color style and muted colors match the innocent tone of the show perfectly, the character designs don’t help matters much, the majority of characters look alike with slight changes in hairstyles. This problem is made even worse by the fact that there are so many transgendered characters that don’t carry any distinctive physical gender characteristics.

Some characters are never properly introduced, the show relays on its story telling in order for the audience to understand character relationships but because of the number of characters that breaks down. It isn’t until the show fills in some detail with flashbacks that certain character’s relationships with Nitori are apparent. This goes back to the problem with episodes 2 and 3 and with the fact that this series is an incomplete snapshot of a much larger story. The anime stays true to the source material but that implies a lot of prior knowledge of the characters, the relationships, and the events which happened previously. One character’s, a transgendered woman who serves as a mentor for Nitori, role in the narrative is never explained. She appears and acts friendly to the much younger Nitori, gives him advice, and they say a friendly farewell. It isn’t until later in the story when she is introduced to Anna that her connection to Nitori is explained. 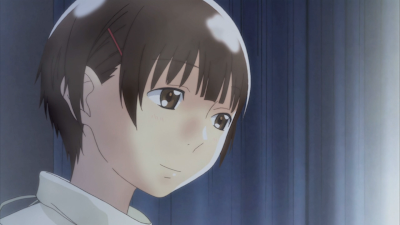 The problems of episodes two and three almost entirely disappear as the show steps into its own arc. Even so, the anime feels more like fan service for the readers of the manga than a standalone show. It baffles me that they wouldn’t want to try to animate the entire manga line. The only explanation is that they had 11 episodes to work with, wanted to get the pacing right, and thus picked the most interesting part of the story to animate. So while I’m now extremely interested in reading the Wandering Son manga, the anime is an incomplete experience. It still is worth watching to get a taste of the fantastic characterization and writing that Takako Shimura is capable of, and to see the feat that Ei Aoki accomplished in matching the art and animation to the tone of the show. However, in order to get the full experience of Wandering Son the Manga is a far better choice.

One thought on “Review: Wandering Son”