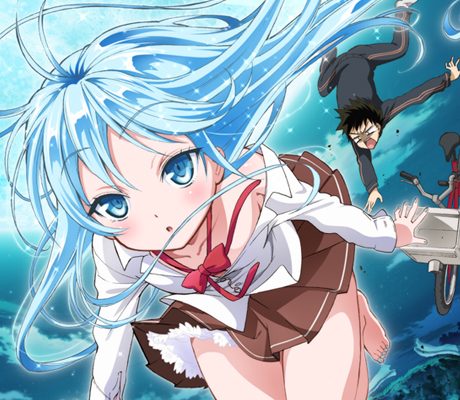 Moe comedies are a dime a dozen at this point and it’s refreshing to see one that explores some unusual themes and that offers some genuinely good character drama. Denpa Onna to Seishun Otoko is the story of Makoto Niwa, a school boy who comes to live with his eccentric Aunt and cousin after his parents move overseas. He grows close to his cousin, Erio Towa, and helps her slowly break out of her shell. 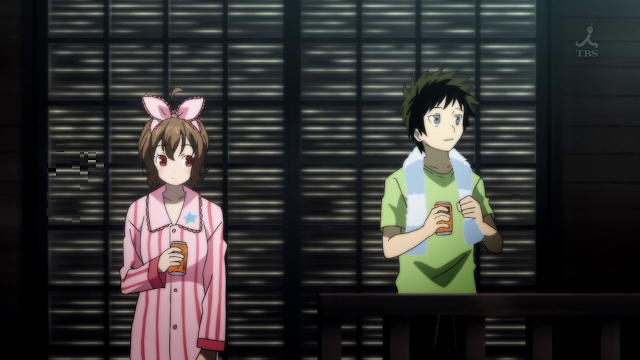 Denpa comes from the Japanese for “electric wave” and is used to refer to people who act strangely or hold strange beliefs; similar to the “tin foil hat” symbol in the United States. The story is certainly full of characters who hold odd believes and act strangely, the chief among them being Makoto’s cousin Towa, who is the main focus of the narrative. Towa starts off wrapped in a futon refusing to come out and interact with the people around her. She became this way after vanishing for a few months a year or two before the narrative begins. Unable to connect with reality, she dropped out of school and lives isolated form the world. As the series goes on Towa slowly starts to open up and some information of what happened during her disappearance is unveiled. Makoto facilitates this change because he refuses to accept Towa’s current way of living and is annoyed at his aunt who ignores Towa instead of dealing with the problem. 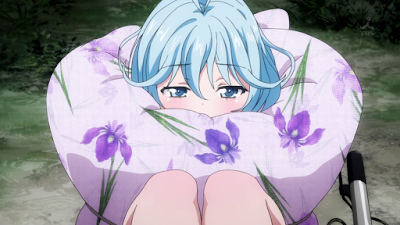 The growth of Towa is heartbreaking as the audience slowly realizes how stunted her development has been by the disappearance. Makoto helps her open up by just interacting with her, something few have tired since her regression. As Towa becomes more familiar with her cousin she is slowly able to interact like a human being again. It’s an interesting exploration of mental illnesses like regression, disillusion, and being disconnected with reality. As Towa comes back to the world the damage done to her is apparent. The scenes where Makoto is being rough and pushy with Towa are some of the most touching of the series because in Towa’s reluctance are signs of what she has been going through as the world slipped away from her.

Of course, regression of a good catalyst for Moe and this show has it in spades. The eccentric qualities of the characters make for awkward interactions and that leads to Moe. Makoto is chased by two of his classmates, Ryuko and Maekawa, both of them representing conventional moe tropes. Ryuko is the classic energetic go-getter, small and cute character in the style of Clannad’s Nagisa and Maekawa had the old sister character vibe topped off with a layer of cosplay Otaku. While the characters are generic the interactions the girls have with Makoto are sweet, sincere, and feel extremely real for a show with Moe elements. The procedural style of the relationships give the show a dating sim adaptation feeling but the relationships themselves are more subtle and playful than the standard Key adaptation. My favorite of the “dating” scenes has Makoto going to Maekawa’s house where she tries to impress him with Cosplay, cooks him a small meal, and play Video Games together. It’s a sweet moment not standard of Moe anime. 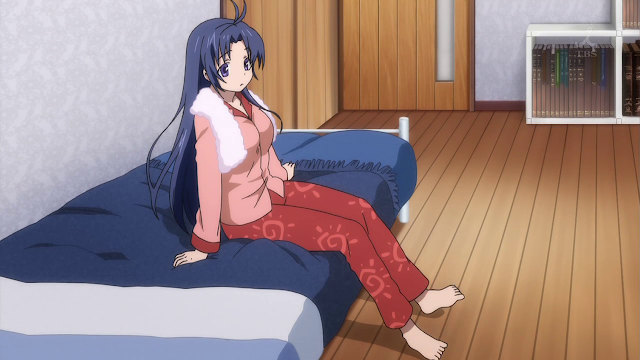 Makoto’s Aunt Meme, she is a 40 year old who acts like a young child, is an interesting character to include in Denpa Onna. Finally, Japan has figured out how to make an adult act like a Moe character; just give her emotional baggage that causes regression! Meme’s storyline comes down to an attempt to cope with aging and her attempt to act like a child and flirting with her young nephew are ways she is desperately attempting to hold onto her youth. Denpa Onna merges the character’s narratives well in the climax of the first half of the series; a wonderful metaphor for growth and moving forward is employed as a way to examine how the characters will continue to move forward, continue to better them.

The problems with Denpa Onna become much more apparent in the second half of the series. The romance arcs move to the forefront of the story and a new Denpa is introduced, because Towa wasn’t weird enough to carry the themes of the show I suppose. This brings the focus of the show away from Towa and Meme and more on the character development of Makoto and the love triangle forming around him and, frankly, the show becomes less interesting. What started as an interesting character drama with some Moe characters that were fun to watch because of their weird ticks transitions into a generic romance with a weird Moe girl tossed in almost as an afterthought. Yashiro shows up one day on the opposite baseball team in a league Makoto joined and is dressed in a complete 1960s style space suit. Like Towa she believes she is an alien, is using something to symbolically hide herself away from the world, and needs Makoto’s help to open up the world around her. Some narrative elements from the first part of the show carry over to the second but it mostly ends up as a rehash of the Towa arc. Meme is also notably absent from the majority of the second half of the series, unfortunate because of the way her arc ended in the first half made her one of the few grounded characters of 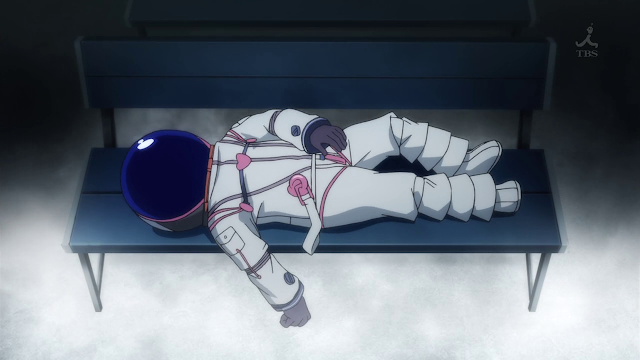 the series. She appears in one major scene which is mostly humorous and works to destroys some of the realism that Denpa Onna had tried to maintain. Yashiro, at best, distracts from both the romance story and the relationship Makoto has with Towa. I don’t know why she had to be included in the narrative, and the only reason I could think is that SHAFT believed that more Moe characters would translate to more profit.

In reality, Denpa Onna is adapted from a series of Light Novels so the first six episodes, which have a beautiful arc that ends skillfully, represent the first novel while the second half of the series adapts the second. Gluing the two together disrupts the flow, takes away from the character work accomplished in the first six episodes, and harms the overall narrative of Denpa Onna. Yashiro is annoying and jamming her into an already crowded thirteen episode series kills Denpa Onna just as it was getting rolling. 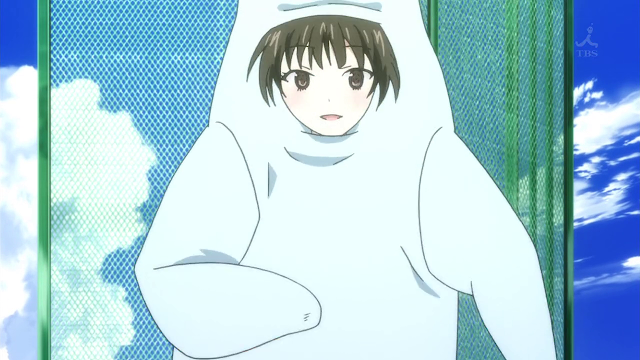 It is hard to really put my finger on what I think of Denpa Onna because while I really liked the first arc, the interesting character development of Towa, and the emerging Romance story the anime is ultimately hampered by Hitoma Iruma shoehorning in Yashiro into an already crowded cast. Some of the best moments of the second arc are destroyed by Yashiro’s presence and the character’s development is almost nonexistent. It feels as if the writers were simply trying to out Moe himself and not even the skilled direction of Akiyuki Shinbo could help the series recover from this obvious blunder. Denpa Onna’s first arc is certainly a necessity watch for Moe fans and a lesson in using ridiculous characters in a serious narrative, but even the most diehard Moe fans will find the second half weighted down by the addition of the poorly written and unnecessary Yashiro.