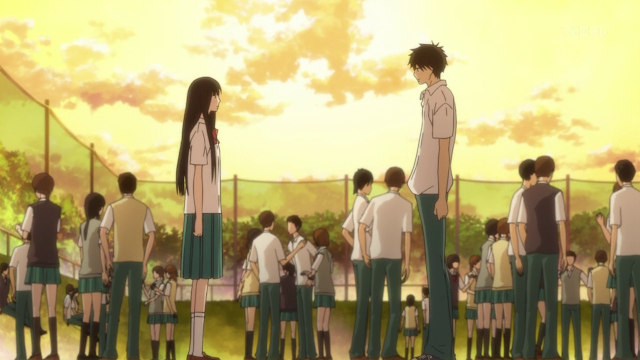 Kimi Ni Todoke was a hit because of its beautiful art and sweet narrative about the reclusive Sawako as she slowly broke out of her shell and learned how to make friends. The sequel picks up months after the original left off. Now accepted by her classmates, Sawako struggles with confessing to Kazehaya; the boy she loves and the person responsible for breaking her out of her shell; but can Sawako muster up the courage to tell Kazehaya how she feels? 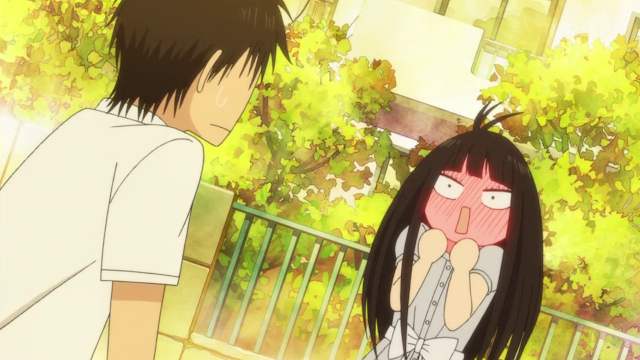 The animation of the original Kimi Ni Todoke was beautiful working in a standard style, super deformed bits, and an amazing watercolor-esque. effect based on the covers of the manga. The sequel surprises with some far better animation than its predecessor. This is apparent because the show works in some old animation from the previous series, in the Episode 00 recap and in some brief flashbacks towards the end. The lines of the animation are crisper; perhaps due to being animated in a higher resolution; the colors are more vibrant, and the animation seems more fluid. Production I.G. clearly wanted to do the series justice and by limiting it to thirteen episodes was perhaps able to get the look they wanted.

The series picks up shortly after the original, making this review a little redundant because anyone who watched and liked the original doesn’t need to read a review to know they want to continue. The first series ended with Sawako and Kazehaya sharing an unofficial date on New Year’s but neither take any initiative to actually admit their feelings for the other. The frustrating part of Kimi Ni Todoke is that the two main characters are in love with each other, but both of them are too scared to admit it to the other out of fear of being turned down. Kazehaya fell in love with Sawako because she was quiet and shy, and never fawned over him despite him being the most popular guy in school. Sawako fell for Kazehaya because of his unbiased view of people, he doesn’t care that Sawako is weird and sheltered from the rest of the class his goal is for everyone to be able to get along. 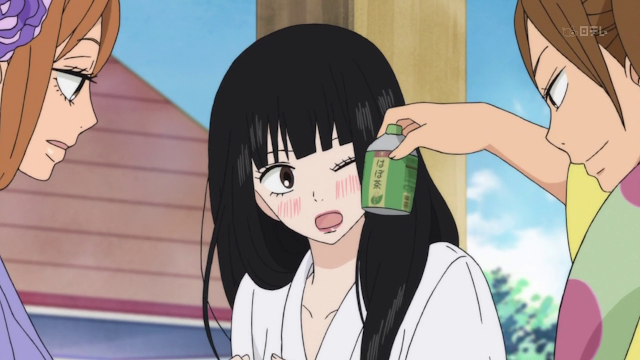 The main draw of Kimi Ni Todoke are the characters themselves, unfortunately this acts as a double-edged sword as some romance fans will find both character’s apathy frustrating. The relationship is sweet and innocent in a fashion that is almost unrealistic. However, Kimi Ni Todoke characterized Sawako and Kazehaya carefully enough to make their innocence realistic. Sawako is such a sweet and lovable character, there is rarely a scene where I don’t want to hug her and ensure her that everything is going to be all right, but it is backed up by years of being teased and isolated from her classes. She has spent much her childhood alone and thus doesn’t know how to interact with people as a normal high school girl. It does become frustrating that the characters are so slow to make any type of forward movement. Sawako and Kazehaya fall into misunderstanding on top of misunderstanding and have to dig their away out of it. The audience is given the tiny details of their thought processes along the way, which slows the show down to a crawl and yet it hits a cord with me and sucks me into the drama. The audience gets into the heads of the characters, lives inside them, and comes out the other side still frustrated by the lack of progress in the relationship but absolutely enthralled by the level of character drama. 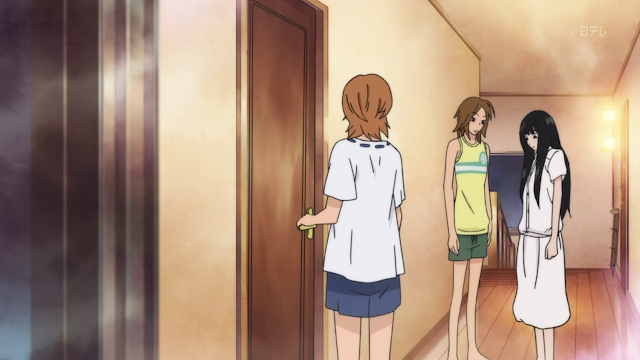 The structure of the thirteen episode second season is around a single goal, the story of how Sawako and Kazehaya finally get together. The original series allowed some room for side characters to get a storyline and Sawako to play a supporting role but here Production I.G. focus’ is on the main story of Kimi Ni Todoke and they tell it beautifully. The slow development of Sawako and Kazehaya’s relationship match the tone and art style of the series to create a beautiful snapshot of two shy teenagers attempting to express their feelings for each other. The importance that the show gives to the confession leads to some melodrama, but it is rare that a teenage romance is without some melodramatic themes and the premise of Kimi Ni Todoke Season 2 is that the confession is the most important step for Sawako to make to further break out of her shell. It is weaved into the fabric of the series and because of that the melodrama is more forgivable that in less well-crafted narratives. 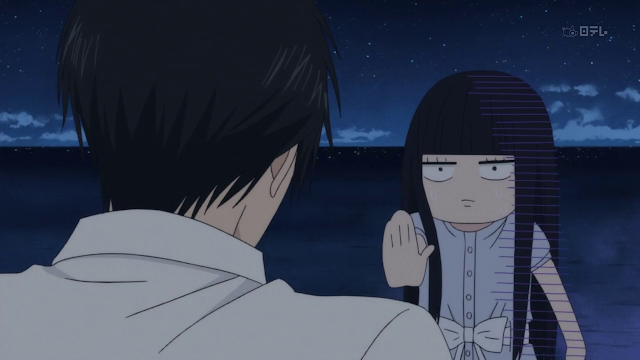 Kimi Ni Todoke has some elements which just don’t work after thirty episodes. The one-note joke of Sawako looking and acting scary has overstayed its welcome. It was an effective way of introducing Sawako to the audience as a starting point for a character which needed to progress further but it now has less to do with character development and is used for humor, which simply falls flat. There is a character type in anime, the naturally scary girl that Sawako supposedly is, that I don’t get. I’ve also seen it attempted in D. Gray Man and Ramen Fight Miki, something is lost in translation and I just don’t understand the humor. The pacing, as I’ve stated above, is also going to turn some fans away. Kimi Ni Todoke is a slow show. The romance was started in the first episode and now 38 episodes into the series the pair comes to the point of confession. It is a slow character drama and if you don’t know that going in, the pacing is going to turn you away. 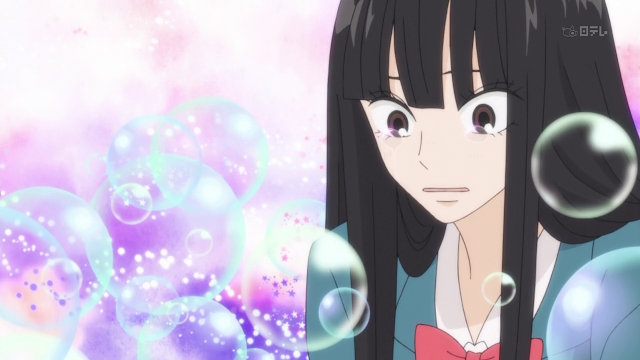 Kimi Ni Todoke is an exceptional anime romance with some interesting, well written characters and an adorable narrative that follows the growth of two shy high school students. The depth in which Kimi Ni Todoke gets involved with these characters is unparalleled in any other anime romance I’ve seen. Being an intense High School drama the show does lean towards some melodrama, but it works within the context of the series. The show isn’t without its blemishes; of course; what little comedy the show has is poorly executed, most of the action in the series takes place in the character’s heads, and the relationship of the main characters progresses at a crawl. Kimi Ni Todoke’s second season picks up where the original left off and concludes the main question of the story, will Sawako and Kazehaya get together? It doesn’t disappoint.