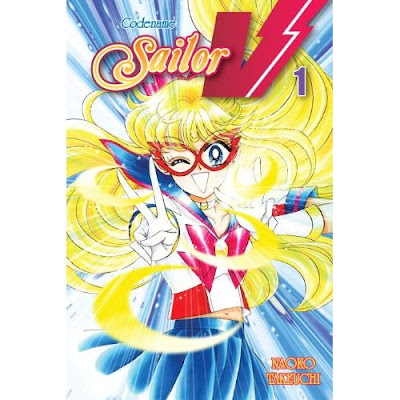 Naoko Takeuchi’s first venture into the world of Sailor Moon is the short series “Codename Sailor V.” Sailor V serves as not only prequel to Sailor Moon, but also as a first draft of what would become one of the most popular Shoujo series of all time. Minako Aino is a normal High School girl until she meets the talking cat Artemis who grants her the powers of Venus and the ability to transform into Sailor V: Defender of justice. 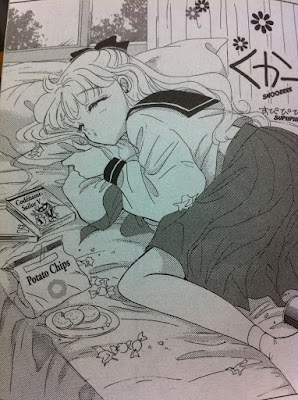 Sailor V is a short manga that was published over six years and due to this it feels extremely episodic. Every chapter Sailor V reintroduces herself to the reader and catches them up with the fact that she has the power to transform. This gets tired fast when you have a Tankobon with half of the series collected. A cohesive narrative doesn’t seem to exist even though V is battling the same evil organization throughout, but the reader is never treated to information about what this organization is or knowledge of their goals. They act as a blank stand in so V has an antagonist to face. It wouldn’t be a problem to without complete information from the reader on the identity of the enemy but withholding awhat their actual goals are gives the narrative almost no sense of urgency. This group wants to suck the energy from people, that’s all the reader knows.

Obviously a manga where the main character has to reintroduce herself at the start of every chapter isn’t going to have the deepest characters. Minako is a collection of traits that she is forced to overcome to defeat her foes; those being laziness, lack of motivation to study, and easily becoming obsessed with idols. Most of the enemies of the manga being disguised as idols allow V to face this weakness and this aspect of the narrative actually makes a surprisingly bold statement about pop idol culture. Takeuchi manages to sneak in a lot of social commentary for the benefit of the young female readership. While Minako is relatable, with her general apathy towards studying and obsession with idols, when the “Dark agency” attempts to brainwash all of Japan into believing that work and studying are worthless Minako steps up and defends them. Although she might not be enthusiastic about those obligations she knows they’re important, especially after getting a snapshot of how the world works if the Dark Agency succeeded. 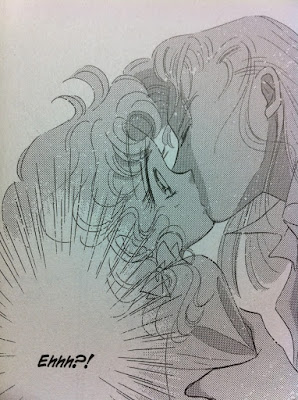 Sailor V has to look past the obvious and see deception before she is able to defeat her foes which sometimes causes frustration for the reader because no matter how many times she defeats “The Dark Agency” Minako still manages to fall for the majority of the agency’s obvious plans. Minako even regresses after Chapter 4, where she suspects the new idol foe before the consultation of Artemis. But those instincts seem to be gone by the next chapter, a symptom of the episodic nature of the series.

Minako doesn’t grow or change much over the course of the volume until the final chapter where some of her preconceptions are challenged when she falls in love with a punk gang leader. Minako is able to grow a little thanks to facing her first real love and comes to terms with the idea that looks can be deceiving, as it were. The gang leader’s duality contrasts the “Dark Agency” which is only painted in black and white terms.

Sailor V is far more a comedy than it is an action or romance story. The action sequences are contained in two or three pages per chapter leaving the rest of the book dedicated to character humor. Not only are Minako’s own personality flaws exploited for humor expertly but I was endeared to the poor police detective who becomes frustrated that Sailor V keeps solving his cases, or the police superintendent-general who has fallen completely in love with Sailor V. The best part of each chapter is the costume that Sailor V decides to disguise in during each story. 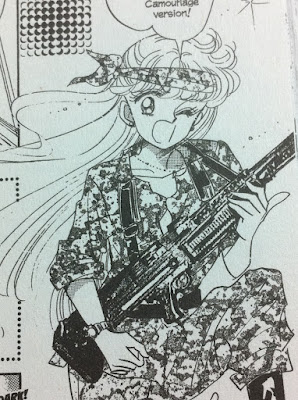 Using her powers she can transform into anything she wants and this leads to some of the most humorous and adorable scenes in the book. My favorite of these transformations is when she decides to take the form of a “GI fighting girl” which personified her resolve at that moment. That transformation is great due to the sheer randomness of the choice, but it also represents a slight character shift, being one of the few times Minako shows serious resolve.

Ultimately Sailor V suffers from being repetitive which comes from lack of a contiguous narrative, real character development, and compelling action. The art is a step below Sailor Moon with only a few stand out images. Sailor V is best when it is being a light comedy and loses steam when the chapters move towards the conflict with “The Dark Agency.” There is enough good in Sailor V to make it a fun read but its shortfalls are obvious, especially after reading the first volume of Sailor Moon. Fans of Sailor Moon will want to read Sailor V because of how they connect and my reading of Sailor Moon was definitely enhanced by what I learned in Sailor V. But I recommend that most readers simply move on to the sequel and leave this book for the more hardcore Takeuchi fans.