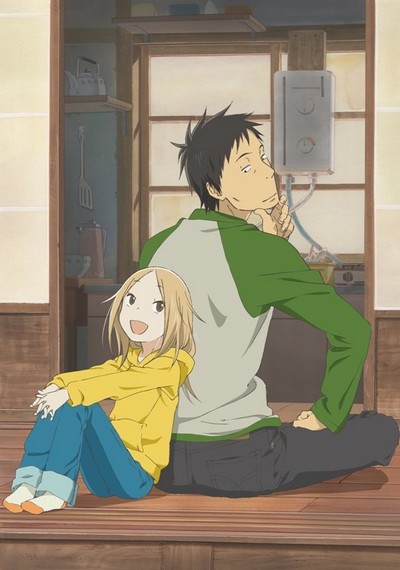 Based on the Eisner Award nominated manga, Usagi Drop is a beautiful anime about an adult learning how to take care of a small child. What seems like an adorable slice of life comedy slowly turns into a much richer experience as the show explores themes of sacrifice and what it means to be a parent. Daikichi, a thirty year old salesman, goes home for his Grandfather’s funeral and learns that he had a six year old daughter with an unknown woman. After overhearing the family’s plans to set Rin up for adoption he swoops in and decides to take the girl home. 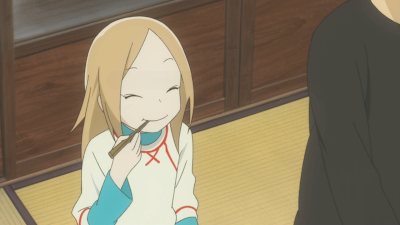 The basic structure of Bunny Drop is as a slice of life show. The entertainment comes from Daikichi learning how to cope with the sudden change in his life as Rin grows and develops. The audience is carried along with Daikichi as he learns what taking care of a six year old girl requires. The problems start almost immediately when Daikichi forgets something as fundamental as signing Rin up for a nursery school. The single change, having to make sure Rin gets to and from Nursery School, forces him to complete alter his morning routine and prevents him from putting in the hours of overtime that he is used too.

The refreshing aspect of this slice of life show is that it isn’t played simply for comedy. While Usagi Drop is extremely funny it takes a realistic approach to the subject showing how a man like Daikichi’s life would change if he was suddenly tasked with taking care of a young girl. The humor of the show comes as a result of Daikichi failing to remember or realize an obvious aspect of raising a child and becoming frustrated, or as a result of Rin or one of her friends doing something cute. It’s a natural humor and is worth more because it comes from how endearing the characters are to the audience and not from a simple one off joke. 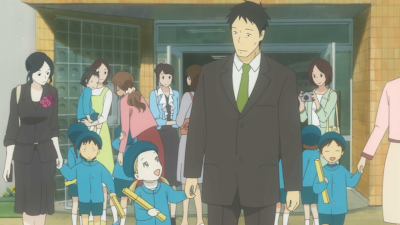 The animation and character designs of Usagi Drop are beautiful. Taken directly from Yumi Unita’s Manga they favor a more realistic approach while maintaining the anime style. Characters’ age is expressed well with the fresh faced Rin having a simple, round, cute face while Daikichi carries distinctive characteristics of age while displaying emotions subtlety, with the occasional exaggerated expression. It’s a little refreshing to see adults in anime actually take on the characteristics of age, especially in a show like Usagi Drop where the narrative is about growing up and gaining responsibility. The color palette of the show also helps with the realistic tone, choosing muted colors and even employing watercolor style art for some backgrounds and wild life.

Rin gets the most character development throughout the series, although Daikichi is a close second, mostly because she is still a young developing child. It’s fantastic to watch her go from the shy and mostly quiet little girl shown in the first episode at her father’s funeral and over time slowly grow into an intelligent, smart, and somewhat independent little person. The show does a good job of highlighting important moments in Rin’s development such as her first few moments at Nursery school where she first started making friends, her struggles with wetting the bed, getting over her fear that Daikichi will die one day die like her father did, and her 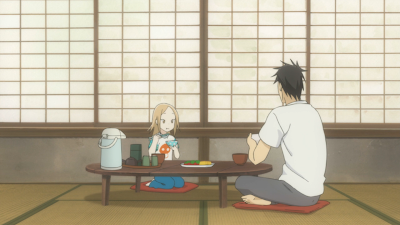 ability to get herself ready for school. All of those moments are small but each one of them represents a large move forward for Rin. Even watching her skills develop as the series progresses is a treat, for example she goes from knowing how to make rice balls, to helping Daikichi with small tasks in the kitchen, and finally to cooking mostly on her own. My reaction to thinking of those moments can be summed up as an emotionally charged “D’awwww,” and unless a viewer doesn’t have a soul they’d be hard pressed not to admit the same.

The surprise of the series is how deep it would get at points. The theme of sacrifice runs through the entire series as Daikichi talks with different parents about how they dealt with the burden of parenthood. The most profound one is Daikichi’s coworker who asked to be demoted so she could spend more time with her child this goes against the classic image of the Japanese business ethic where work comes before family in almost every respect. Yumi Unita wants to challenge that notion, to rewrite that idea in the minds of the Japanese people. With Daikichi starting as the classic notion of a Japanese salary man, one who works long hours and drinks with coworkers long into the night, the idea of having to sacrifice career for family is radical, even upsetting, for his coworkers and subordinates. 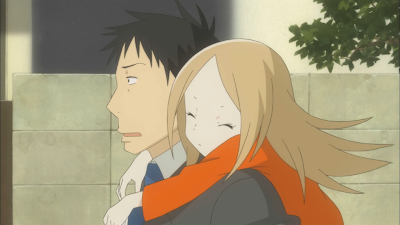 The exploration of personality types and parenthood also is a constant theme that runs through the series. Again, Daikichi’s coworker displays a noble love for her child to the point of sacrificing personal goals where Rin’s own Mother disappeared from her child’s life so she could pursue a career. Various other foils pop up throughout, the most extreme being Daikichi’s sister who is getting married but laments the fact her husband wants children cause she isn’t finished having fun, while the other father’s Daikichi meets at Rin’s school wouldn’t exchange fatherhood for anything, even the fun of their youth. Yumi Unita goes through extra effort to cram in the full range of parental personalities into the show. Early I found her negative attitude towards men, because of several women who complain that their spouses do nothing to help raise the children, as her own opinion on the majority of fathers and Daikichi stood alone as the ideal man. However, further into the series she introduces men who are more involved with their children than their wives. Again, realism wins in Usagi Drop above all else as Unita goes through the trouble to explore all attitudes people have towards parenthood.

The only misstep in the series is the strong hints at a romantic relationship between Daikichi and Yukari, Rin’s friend’s mother. There is a ton of tension and clues throughout the series but at the end the audience is left knowing nothing about the progress of their relationship. Some small hint before the series ended would have been enough but hopefully that thread gets explored more fully in the manga. From what I’ve heard after the anime ends there is a nine year time jump, so the possibility of that relationship being developed beyond a crush is unlikely, which makes all the tension between the couple a tease and nothing more. 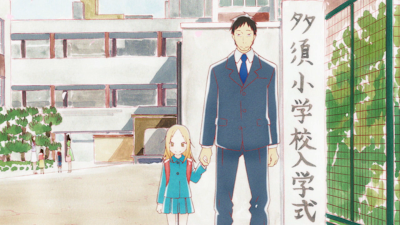 Usagi Drop is a beautiful slice of life series about a man learning to cope with suddenly having to care of a six year old girl. His struggles with the new responsibility create a wonderfully subtle and realistic sense of drama throughout, combined with some fantastic characterization of both him and Rin. Beyond the simple Slice of Life narrative is some deep commentary about Japanese life and the impact and meaning of being a parent, which takes the show from being about a cute little girl and transforms it into an exploration of personality types within parenthood. The subplot of Daikichi’s romance with another parent is sweet, but never develops anywhere profound before the end of the series. However, that is one small blemish on an otherwise perfect piece. Usagi Drop is a rare gem that many will try to imitate in the coming years but none will be able to balance the elements with the kind of precision that Yumi Unita has achieved.

Usagi Drop is currently streaming on Crunchyroll.com. No excuses.