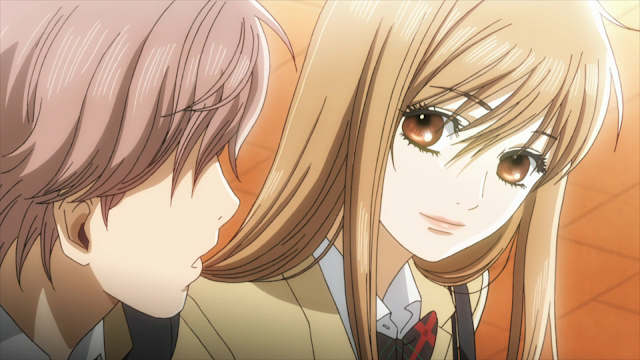 High School student Ayase Chihaya is obsessed with the Japanese card game Karuta but her attempts to get a club started at her new high school aren’t going well. She gets excited when Taichi, who she used to play the game with, also got accepted to the same High School. However, his interest in Karuta has waned over the years. The episode then flashes back to sixth grade where Chihaya meets transfer student Arata and becomes inspired by his incredible Karuta skills. 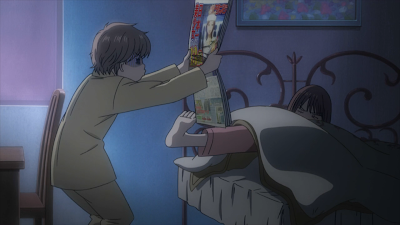 Chihaya is a cute, single minded girl who is so focused on the game of Karuta that she seems to exclude everything else. Boys don’t like her because of her strange personality, a fact that she doesn’t seem to mind. Her odd behavior is captured in an exceptionally cute early scene with Chihaya hanging flyers wearing a work belt, skirt, and sweatpants which causes her to be screamed at by a Teacher. Her disfunction really hit a cord with me and made me instantly fall in love with her, it’s a bit refreshing to see a Shojo heroine that has a strong dream not involving marriage.

Sixth grade Chihaya comes off as an even stronger character. She has the same characteristic of ignoring how people think of her and uses that to defend and then befriend the shy transfer student Arata. She has a fearsome energy to her that obviously had a profound effect on Arata, who opens up to her after she shows kindness. Her ability to just ignore the rest of her classmates and do what is right is an admirable quality. 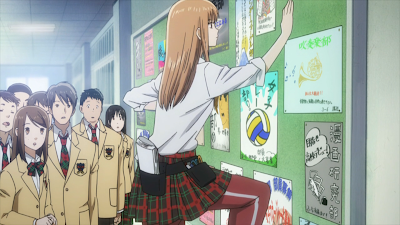 Art and animation are nothing special, simple Shojo fair. Although the facial expressions Ayase gives are hilarious, adorable and different enough to be called unique, although just slightly. The sequence of Karuta, a word based card game that requires heavy memorization, was exciting but I can see it becoming repetitive. It’s a feat to animate a game like that and make it watchable, but I’m sure the same was said when Hikaru no Go first started.

Chihayafuru is a sweet story with some interesting Shojo characters. Being Shojo the anime could be a win if they focus on the character relationships going forward but I fear a non-Shonen anime based around a card game could get tired quickly, especially a game like Karuta which a western audience have no connection too. It’s hard to say how the series will play out based on the first episode and Chihaya alone as a compelling character might not able to hold a twenty-five episode series together. This is one to watch, it has potential to be great but it could easily stumble.