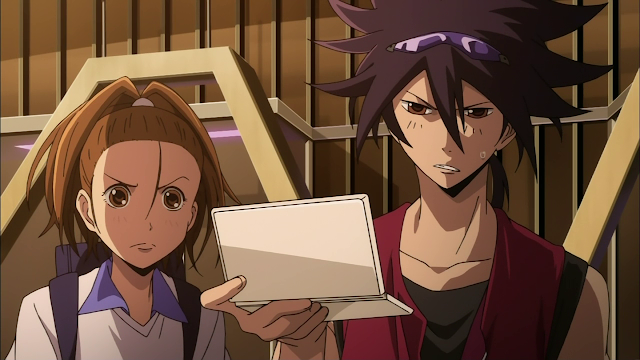 Keito saves a self proclaimed puzzle genius from a collapsing building. He was, apparently, lured there by a hand held computer he obtained from the president of his high school’s Puzzle club. This computer is a test created by a mysterious organization to choose someone for the Orpheus’ Contract, a relic that enables the user to boost his brain power. Keito and his friend Nanoha accept the challenge and enter the mysterious puzzle. 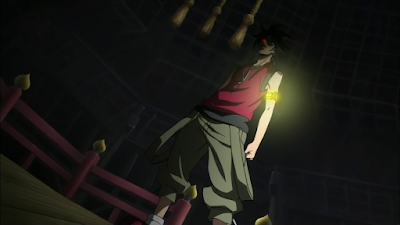 The show has a Shonen style, from narrative to artwork, without any real goal; focus; or interesting hook. Keito enjoys solving puzzles and is exceptionally good at it so much so that he is saught after by the puzzle club at his high school. The problem with the world building is that I’m not sure if Puzzle solving really is a huge deal, it certainly seems to be, or if it is just a small group of super puzzle enthusiasts that the show focus’ on. The self proclaimed puzzle genius, whose role remains uncertain, has ads on TV display his puzzling abilities which are insanely silly and never addressed directly. That is a hint at how important ones puzzle abilities are in this silly world.

The abrupt start to the show and forced flash backs slow this first episode down allowing little time for any development outside of Keito, who is characterized as a bad ass puzzle solver who demands respect. The narrative just dances around the opening scene until Keito reveals he was drawn there by a puzzle computer given to him by the Puzzle club president. At that point, nearly ten minutes in, the show picks up.

The main puzzle is a giant unsolvable maze that Keito immediately realizes the key to solving is located at a suspicious passage. His companion, Nanoha, seems a bit unbalanced. When they first enter the maze she attempts to use a childish tactic of touching the wall while running to solve the maze but after that fails she immediately gains some genius and reveals she memorized the maze and later it’s her observation which solves the puzzle. I wish they did some more development on her before because these abilities come out of no where and actual harm Keito’s image as a genius puzzle solver. 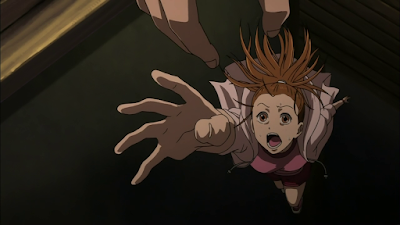 The mechanics of the show also fall short. While the animation is decent and the puzzles seem well done, the music is inappropriately exciting and the show lacks any real character development or world building relaying instead no broad strokes, unacceptable in an episode that uses the first ten minutes to establish the characters and puzzle loving world. The puzzles are done well and were exciting to watch but the audience isn’t invited to take part and there doesn’t seem to be any logical thinking which I can track in Keito’s solutions. I don’t know if a puzzle show can work if the audience isn’t allowed a chance to solve the puzzles on their own. I can see the show getting stale quickly, even for people who enjoy the Shonen formula. I probably won’t be continuing forward and I suggest you approach with caution.