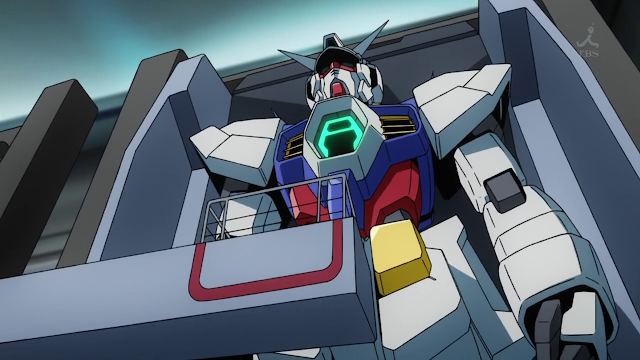 Flit Asuno’s mother is killed during the UE’s (Unknown Enemy) attack on space colony Ovan. Before she dies she gives her son the blueprints to the “legendary white hero” who appeared before to begin an era of peace. Seven years later Flit helped build his mother’s Mobile Suit and named it Gundam, after the hero of legend. Just as Gundam is preparing it’s final tests the colony is attacked by the UE and Flit is forced to pilot his creation. 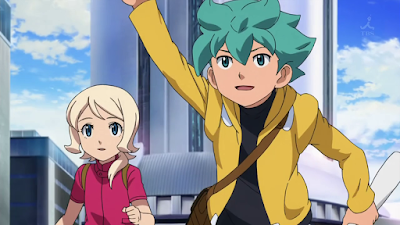 There are two things that I like about Gundam. The first is politics and judging from the set up to this show, which suggests youngchildren batting aliens in giant robots, I doubt we’re going to get the normal Gundam flavor of political drama. Turning Gundam into a show about a robot batting aliens goes against what Gundam is at it’s core. The original Gundam quickly transformed from a wish fulfillment action show to a thought provoking piece on war and political ideology. Gundam AGE can never be that type of show.

The second thing I like about Gundam are the mech designs. Going back to the beginning the mech designs in Gundam were always stunning, especially in Zeta Gundam where the budget had obviously been spent on perfecting those designs and making sure they looked and felt like real machines. All of Gundam AGE’s mechs are simplified designs of the original mobile suit Gundam series. It feels very reductive. In fact the entire show’s art is deformed slightly suggesting a lack of realism in tone. This isn’t my Gundam. 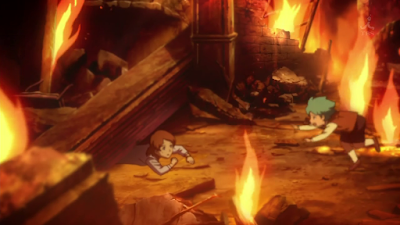 My chief complaint about the show is that it lacks realism. It should be pointed out that the show is a children’s anime, this is really designed for kids eight to twelve, so lack of realism could be forgiven. Still, as someone who is looking for a compelling narrative I can’t accept that this young kid could persuade the military to build his mobile suit design, that he would be part of the team working on it, and despite being a prodigy he is ignored when he warns of the coming attack. The entire build up of the show requires a suspension of disbelieve that I wasn’t prepared to accept. They’re common tropes and exist only to set the main character at a time and place where he can become a hero.

I believe the goal of this series is to get young people interested in the larger Gundam universe. This series is obviously not designed for a current Gundam fan and obviously not aimed at one in their mid twenties. Sunrise might have a fun children’s adventure story with a good amount of dark elements brewing here. However, I certainly can’t say it’s worth watching above almost any other Gundam series.