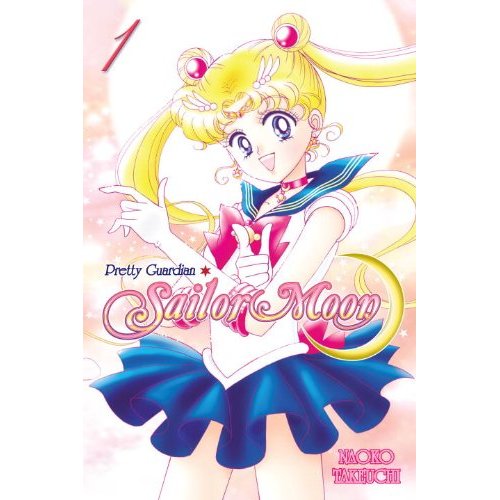 It’d be hard to find someone who doesn’t recognize Sailor Moon, even outside the fandom. The series is responsible for giving Anime it’s first big push into mainstream pop culture and for defining the magical girl genre. I’m happy Kodansha decided to release Moon in the brand new 2003 editions from Japan, potentially introducing this classic series to a new audience. Usagi Tsukino was a normal young girl, although a little on the ditzy side and a bit of a crybaby, who stumbles over a talking cat. This cat, Luna, grants Usagi the powers of the Moon and tasks her to find and protect the legendary silver crystal and protect the Princess of the Moon. To aid her quest she must first recruit allies to her and form a team of Guardians of Justice. 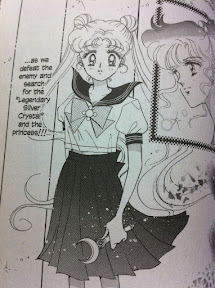 Compared to it’s prequel, Sailor V, Sailor Moon’s art is of much higher quality and much cleaner. It’s stunning considering the series were created at the same time but it’s obvious that Takeuchi had some assistants and a much larger paycheck to help her craft Sailor Moon as opposed to the sporadically published companion piece. The character designs are fantastic with each of the girls getting a distinctive look that suits their personality. Their transformations, although all consist of a similar sailor uniform, have slight differences to help distinguish between the characters. The differences are as slight as giving them all different shoes and slightly different jewelry but it is a nice touch that Takeuchi threw in, it expresses her attention of detail.

I’m coming at Sailor Moon comparing it to Sailor V because Kodansha released both at the same time so I was able to read them back to back. Takeuchi was able to improve on almost all of my complaints in Sailor V in the short time between the two series. Sailor Moon is more contiguous, has a defined goal for the main characters, gives the villains a face and motivation, and Usagi gets a clear character arc in this first volume which takes her from a lazy middle school girl to preparing for the responsibilities of leading the Sailor Scouts. 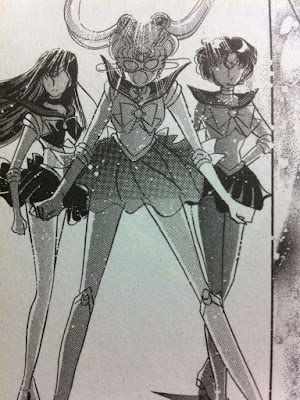 The most impressive part of the work is how well it combines Shojo with Shonen elements. Sailor Moon is clearly a shoujo title with the romance between Sailor Moon and Tuxedo Mask appearing early and often throughout this first volume. Even with the relationship budding, Sailor Moon doesn’t know exactly who Tuxedo Mask is or what are his exact goals. Is he a villain? Ally? Why does he want the legendary silver crystal? These questions come into the narrative to create a mystery that adds another layer of plot and character depth. The fighting and team of warriors are nods to Shonen or super sentai, monster of the week type shows. The enemy, although more fleshed out than in Sailor V, still lacks any kind of depth. They are evil people who are doing evil things for evil reasons, and while they are starting to have personalities in this first volume they’ve never around long enough to get any individual characterization. Each of these threads on its own doesn’t make a completely compelling narrative but by interweaving them they build into an entertaining and fun story. 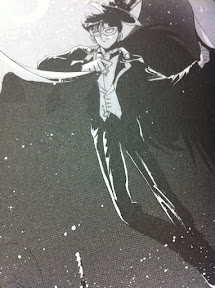 The goal of this volume is to bring together what will be the main cast. Each of the Sailor Scouts gets their own origin story that gives amble background and personality information which explains why they receive their chosen powers. The introduction of the scouts and the interaction between the characters was the most enjoyable aspect of Sailor Moon. Mercury, Mars, and Jupiter are all strong and capable people and it seems odd at first that Sailor Moon is chosen as the leader of the group. It’s in the interactions between action scenes and in the introduction of characters that her leadership is shown. She is friendly and likable, and those qualities draw people to her. So while she is not the most capable fighter of the group she is certainly the most charismatic and perhaps most illustrates the aspects of a “Guardian of Justice.”

Usagi is at first an odd choice for the heroine of the series. One of her biggest traits is that she is a crybaby, which is exploited for humor early in the book, and isn’t really that enthusiastic or driven by her sudden powers. She finds her abilities severely lacking and even requires aid from Mercury, who was recruited by Usagi, to complete her training. Having the heroine start at such a low point gives plenty of room for development, even at the end of this first volume Usagi begins to see her own short comings and dedicates herself to push beyond them. What seems to be building is a unit that can’t work independently but a team that needs to draw from each other in order to fight. Those themes are certainly common in Shojo, friendship and love, so it’s not surprising that I see them plastered all over Sailor Moon. 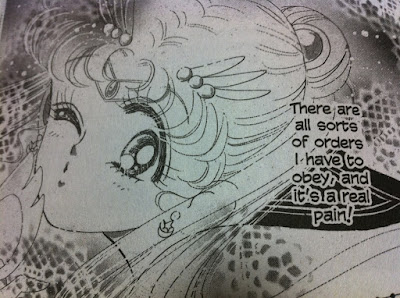 The path I see the series going down is that Tuxedo Mask will be a crucial part of this group, giving Usagi the confidence and drive that she lacks. Is this a positive theme in a title meant for young girls? I’m not going to condemn the series based on speculation but even if the crutch of the show relies on Usagi needing a man to feel confident the rest of the cast already consists of some strong and independent characters to even out Usagi’s weaknesses. Mars, a shrine maiden who jumps to action without hesitation, and Mercury, a super intelligent girl who spends all her free time studying even though she is already at the top of her class, those two alone are solid role models that balance out Usagi’s failings.

While Sailor Moon isn’t revolutionary or new to seasoned manga fans it offers a good historical perspective on tropes that havebecomealmost universal to the word “anime.” New fans, especially young women, will find what is presented in Sailor Moon new and excited, incredibly enjoyable, and fun. The characters are solid and interesting, there is a developing mysterious that kept me drawn in, and the action is standard shonen fun. Surprisingly, there is something inside Sailor Moon for everyone and it’s necessary read for anyone who claims to be a fan of manga.