In this first part of my Winter Preview are the first impressions for Poyopoyo, Familiar of Zero F, Mouretsu Pirates, and Brave 10. 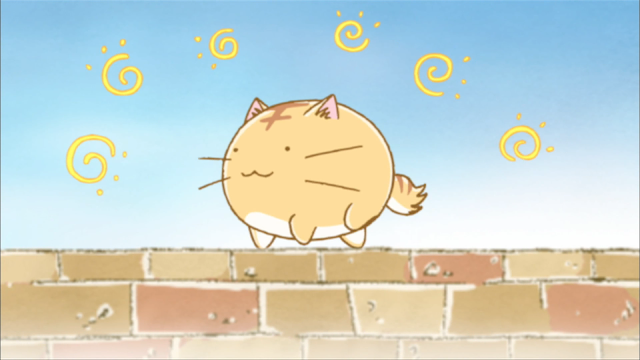 Moe Sato finds a cat and names him Poyo because of his round shape. The episodes are short pieces about Sato’s new life with her pet. 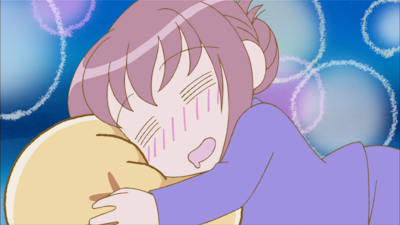 Poyopoyo’s first episode was extremely quick and simply a set up for some of the jokes going forward. The show is about an adorable cat who is round, to the confusion of most of the cast and is really the chief gag of the series. This episode established that the cat does cat like things, and is cute while doing them.

The art is cute and fun, fitting the style of humor and the length of the episodes. The humor of the show doesn’t only come from the cat but from a bunch of quick jokes simply tossed at the audience in mass. The Father quickly became my favorite character as you watched him instantly fall in love with Poyo and suddenly put him in a role reversal as he and his daughter beg his distraught son to allow them to keep Poyo.

If you like cats there is no reason not to check out Poyopoyo. It’s three minutes an episode and streaming for free. You’ll find it cute, at the very least.

Poyopoyo is currently streaming on Crunchyroll.com 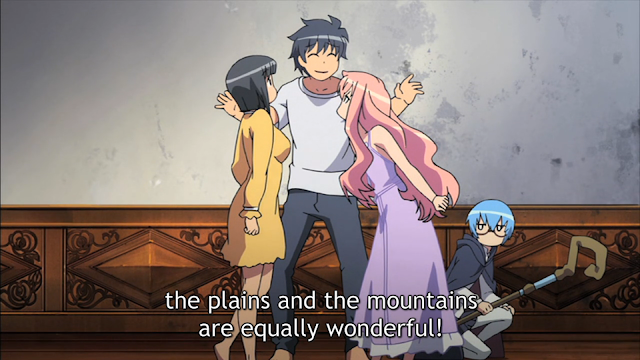 Familiar Zero F is the fourth season of the “The Familiar of Zero.” Based on a series of light novels the series is about Louise who is a magician in training at Tristein Academy who has had no recorded success with magic. During a magic test she must summon a powerful Familiar but instead ends up summoning Hiraga Saito, an ordinary Japanese boy. 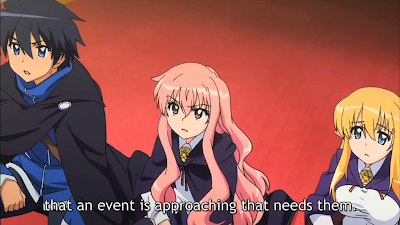 I don’t have much to say about this show. I started it now knowing much about it, and definitely not knowing it was the fourth season of a long running show. What I saw didn’t impress me, and I really couldn’t follow what was going on.

It started with some boob-grab humor, which was the shows way of quickly reintroducing the characters to the audience. Again, being the fourth season of a long running show there is a lot of information left out that the audience is just supposed to know. When the characters are summoned before the Pope I really had no idea what was happening or what the importance was that they were Vord mages, which we’re told posses a legendary form of magic that everyone in the main cast just happens to have… and needs to be told about.

The villains of the show appear out of nowhere and use the boring anime joke of having the older brother look really young and the younger brother look older. They attempt to steal some unknown object from the church. A boring battle happens, and nothing much comes of it. 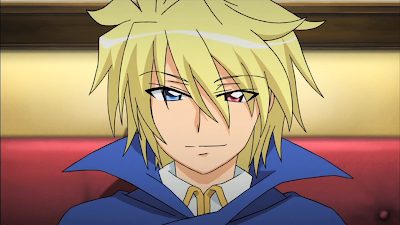 Character development can be seen, barely, in the scene where the Familiar gets angry at his master because she is starstruck by the Pope. So the being that she summoned has some kind of severe inferiority complex? This isn’t character development, this is a weak attempt at humor and it fails. Love interests arguing over silly things seems to be a staple of anime comedies and I’ll never understand the appeal.

dDon’t make the same mistake I did and watch this if you haven’t seen “The Familiar of Zero” before. If you got through the other three seasons I’m sure you’ll know if you want to go forward.

Familiar of Zero F is currently streaming on Crunchyroll.com 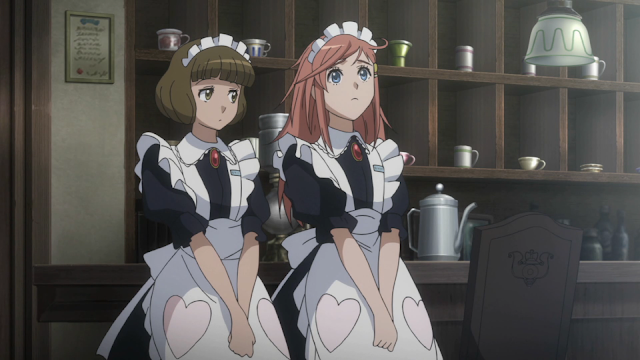 Marika is a first year high school student living in the galaxy Uminoakeboshi. She suddenly finds out her father was the Captain of the Space Pirates Ship “Bentenmaru” and that she is set to inherit the ship, taking over as Captain. 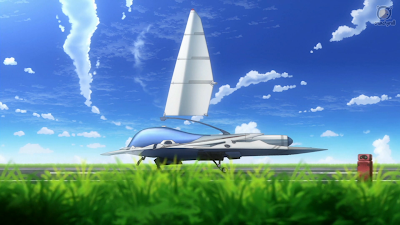 There is a lot to like about the first episode of Mouretsu Pirates. The main character is a spirited young girl who has experience piloting ships in her school’s Space Yacht club, which is far more than I expected as a base for the character, on top of her being an intelligent and driven individual. Her mother, a former space pirate, is wrapped in a ton of mystery which sets a level of intrigue to the narrative. Why did she stop being a pirate? Why never tell her daughter about her father? The rest of the cast is just as interesting, although most don’t get an adequate amount of screen time in the first episode to really get a feeling for them, other than to quickly plant a kernel of development. It was enough to realize that I desperately want to see more of them.

The fact that the pirate ship she is set to inherit is a group of Privateers given licenses by the government during the war for independence is far more interesting than just having them be a gang of thugs. Evil pirates who rape and pillage wouldn’t be a good focus for a show that seems to be setting up for a light comedy. Pirates who are good guys and plunger for heroic reasons make for a more compelling narrative without having to corrupt the main character. 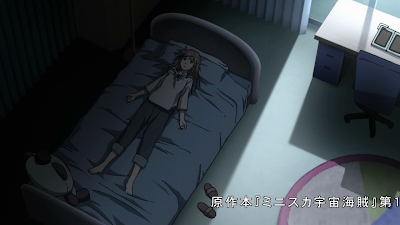 With no space combat I can’t pass judgement on the action of the show so far. Having the main character being pursued by a group who doesn’t want the pirates to exist is a good starting point and what little action there was in this episode was certainly compelling.

The one thing that irked me about the episode was the inclusion of a Maid cafe. It seemed tossed in for no other reason than to show the main character in a maid outfit. While it got worked into the narrative for more reasons than fanservice the fact that this young girl living on a distant planet in space would be working at a maid cafe seems like a lazy solution to the problem. It’s as if the creators needed to sneak something in so the show would appeal to Otaku. 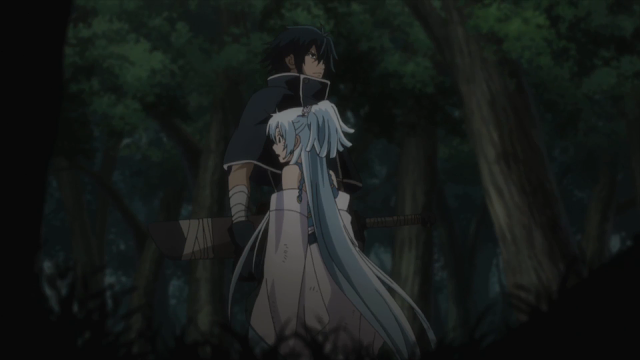 Set during the Sengoku Period the ninja Saizou Kirigakure meets the priestess Nami Isa when she is attacked by assassins. For some unknown reason Saizou feels like he must stick with her and protect her on her journey to seek revenge for the destruction of her shrine. 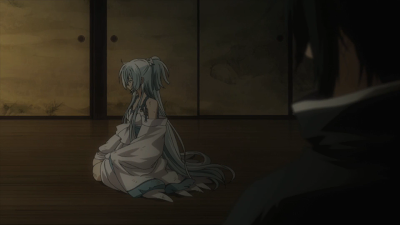 There are somethings to like about Brave 10. It’s an action show that has no identify crisis, it just wants to be a vehicle to show you action. Saizou is a tough scary guy who has powers that make him almost impossible to beat, he saves the girl who will be his love interest, and that allows him to meet up with a lord who is putting a team together in an epic Nick Fury style twist.

Unfortunately nothing is particularly original. It feels like a rehash of a dozen shows that came before from character designs to the set up. Enemies have shown themselves as generic masked Ninja characters, the settings is Sengoku Period which has served as the backdrop for countless shows, and the action wasn’t particularly compelling unless you enjoy enemies failing to take advantage of the main character after they wrap him in chains! 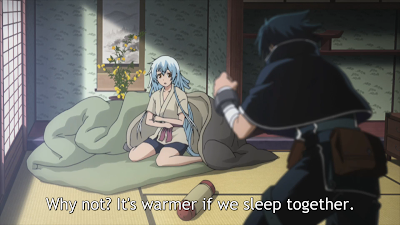 The worst element of the show are the anime tropes tossed in that work to undermine the seriousness of the main character and the tone of the series otherwise. Tropes like characters eating an excessive amount and freaking out around women are tossed in as if to remind the audience that they are watching an anime.

The most confusing part of the episode is the character’s motivation for helping the girl. He seems completely determined not to help her and then suddenly he is protecting her. At the end of the episode he agrees to stay with his new lord because of some loyalty for her that doesn’t seem to exist, at least I can’t find it. The character development is more focused on driving the narrative forward rather than building interesting, fully developed characters.

If you’re an action fan or a serious fan of the Sengoku period than you might find something to like in this show. If those elements don’t appeal to you then it is a definite pass.

Brave 10 is currently streaming on Crunchyroll.com