The second and final part of my 2012 Winter season preview. Here I review the first episodes of Nisemonogatari, Lagrange: The Flower of Rin-ne, Another, and Ano Natsu de Matteru. 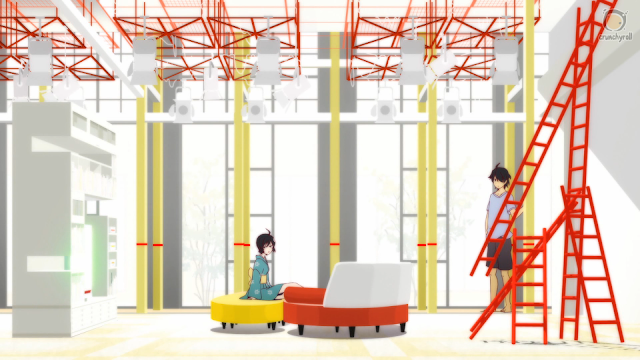 Picking up right where Bakemonogatari leaves off the show follows Koyomi Araragi as he deals with various supernatural phenomena. He also has to deal with his insane girlfriend, his sisters, and a cast of lovably crazy characters.

Fans of Bakemonogatari rejoice! The long awaited sequel is here. Like the original, the animation and character designs are absolutely beautiful. There is a special craftsmanship to the backgrounds in this show, probably because the majority of the show is made up of long scenes of dialogue. Due to the lack of action, the look and feel of scenes becomes extremely important. In the scene that takes up a long portion of the middle of the episode Koyomi speaks to his younger sister about life and love. The room she is in is elaborate, featuring a 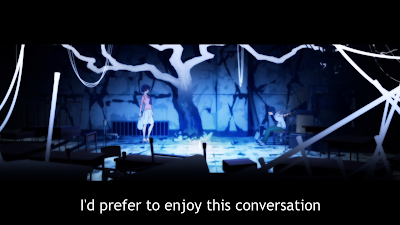 large round couch sitting directly in the middle, a fully fledged art gallery on the left wall, and ladders arranged oddly. The camera angle shifts as they speak to highlight different parts of the scene. These backgrounds are the most beautiful part of Nisemonogatari and like Bakemonogatari I look forward to each new location that Shinbou crafts and look forward to deconstructing how they reflect the narrative.

The show is largely dialogue, but what made Bakemonogatari brilliant is that the dialogue is as compelling as the best choreographed action scenes. The banter back and forth between Koyomi and the various characters is wonderful, each character having a different flavor of banter which allows the characters to get fleshed out in an abundance of detail. It’s almost as if the tone of the show shifts depending on whom Koyomi is interacting. In the opening scene with Hitagi the show takes on a dark, desperate aura but the next scene makes the show feel like a romantic drama. Like Bakemonogatari expect these changes in tone to be constant throughout.

Nisemonogatari is currently streaming on Crunchyroll.com

Lagrange: The Flower of Rin-ne 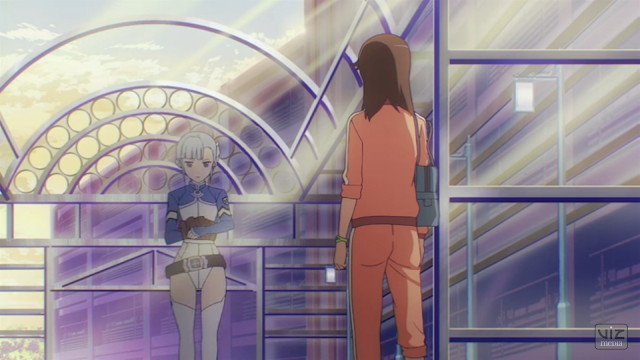 Madoka is an energetic young girl dedicated to helping people with her “Jersey club” and is otherwise normal. That is until she is recruited by Lan to pilot “Vox”, a powerful robot and only defense against an invading alien force. 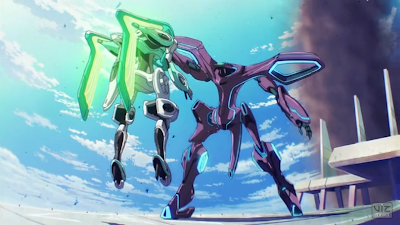 The first episode of this show is simply a paint by numbers Evangelion clone except replacing Shinji with an energetic young girl. Like Shinji, Madoka is brought into a secret location because she is the only person who is capable of piloting a super secret mech that is the only defense earth has against an invading alien force, she is given no instructions prior to combat other than she just needs to “sit in the cockpit,” and she successfully activates the machine and defeats the invaders with seemingly minimal effort.

Honestly, apart from the blatant Evangelion copy and replace, the show wasn’t that bad. It has a fairly good setup with the character Lan arriving from nowhere to find Madoka. Where does Lan come from? Why is Madoka so important? These questions are left up in the air as the battle unfolds. Even the mundane pieces of the narrative have mystery attached to them, such as the reason why Madoka is the only member of her “Jersey Club” despite the fact that she seems incredibly popular. Everyone talks about her club as if it was something that shouldn’t be approached.

While watching this I had an overwhelming sensation that if I had seen this in 2002, I would have instantly fallen in love. I’ve just seen too many similar shows. This doesn’t seem like it’ll cover any new territory or offer anything new to the medium. However, the animation is vibrant and the writing and action aren’t abysmal. This may turn out to be an enjoyable watch, even if it’s a show we’ve seen countless times before.

Lagrange: The Flower of Rin-ne is currently streaming on Hulu.com 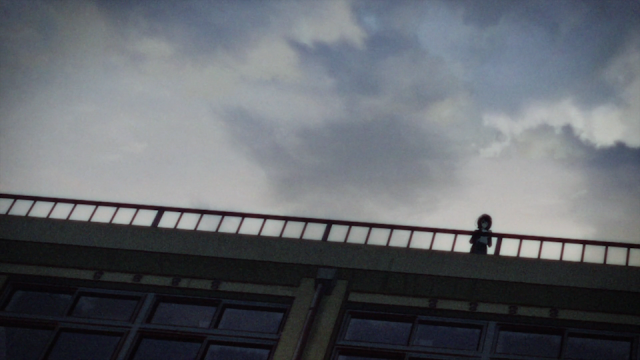 Kouichi Sasakibara transfers to a new school and can immediately feel something frightening lurking within. The feeling seems to come from Mei Misaki, a beautiful girl that no one seems to be aware of except for Kouichi. Why is he the only person able to see her and what secret is the school trying to hide? 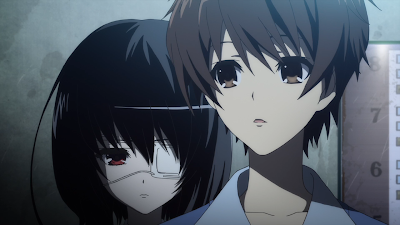 I love the vibe that the show gives off. The atmosphere built around the city, around the main character, and around the school is so wonderfully creepy that they put me in the mood for horror. It isn’t even blatant, it’s just a feeling in the back of your mind that something is off, something isn’t quite right about how some of these characters are acting. There is a mystery to the show, to the main character, one that even he seems ignorant of which makes unraveling the mystery all the more exciting.

I’m not that big of a horror fan, but this show has me intrigued. Trying to pin down what it is, I think it has more to do with the mystery of the show rather than any type of fear the show brought me. While the goal of horror is to scare the audience, a tactic that fails on me because my disbelief is never suspended enough for it to be effective, this show relies more on it’s creepy tone and mystery to build a compelling narrative. Japanese horror is based less on the jump scare and is more focused on creeping the audience out slowly over time until a single huge scare happens that brings the creepy feeling to a crescendo. Anyone who has seen the ring can identify with this feeling when first seeing the girl start to crawl out of the television set. 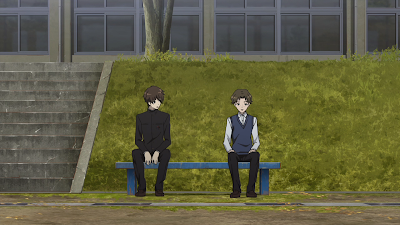 That’s what I expect from Another. Right now the “ghost” is simply creepy, a little weird. As more is revealed about the ghost, about the students in this creepy school, and about the main character the greater the sense of dread will climb.

The one misstep of this first episode was the prologue which described the origin of the ghost and why the school is haunted. This gives the audience knowledge about what is going on before we are even introduced to the main character and it spoils a little of the mystery. I’m hoping the prologue is a clever bit of misdirection, but until that plays out I just feel it’s an information dump in a show that seems to thrive on limiting the information given to the audience.

Another is currently streaming on Crunchyroll.com 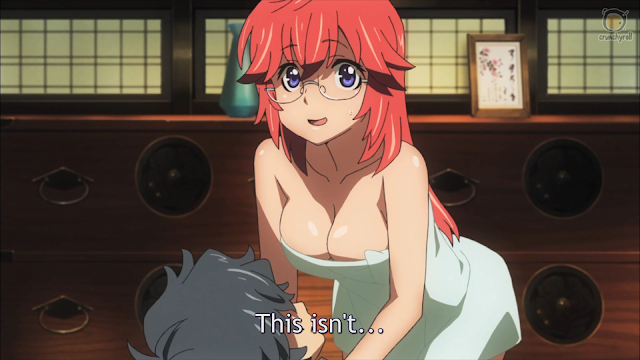 Kaito Kirishima is out testing his 8mm camera at night when something causes a massive explosion at the local dam. He is tossed viciously into the air but he wakes up the next day perfectly fine. That day a red haired transfer student, Ichika Takatsuki, shows up at school and through a series of circumstances ends up living with Kaito. Ichika is an alien and having caused the explosion, feels guilty about harming Kaito and wants nothing more but to nurture him back to health. 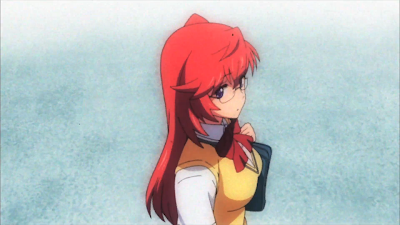 Another show that doesn’t seem to want to bring anything new to the table, with the exception of the cast’s desire to make a film. That single element is compelling in that I’d want to see a well executed play with in a play that might be able to transform a rather generic concept into something interesting. I said this about “Lagrange: The Flower of Rin-ne” as well but it rings just as true for “Ano Natsu de Matteru,” I would have been super excited about this show in 2002. But now, ten years later, I’ve seen more than enough harem shows to satisfy that itch. Better harem shows! I have harem shows I want to re-watch before getting into another attempt to revolutionize the formula.

So Ichika arrives out of the sky in a sudden and impressive showing, by accident injures Kaito so that she has a deep desire to make sure that he heals properly. So what other harem shows start by a girl coming from the sky? Tenchi Muyo; the classic that may have jump started the genre; Please Teacher, Sora no Otoshimono, and Ah! My Goddess to name the ones off the top of my head! Why does anime insist on taking a single popular concept and driving it firmly into the ground? 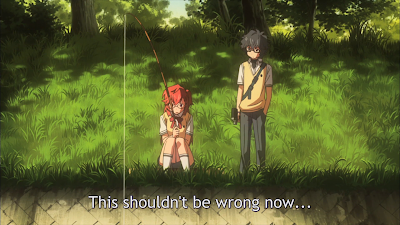 There is also something weirdly non-confrontational about the show. I don’t like how Kaito offers Ichika to stay with him while daydreaming, he doesn’t realize he is actually speaking with her! It’s as if the show is telling Otaku “This is how easy it is to get a woman to live with you!” It’s a vibe I strongly dislike.

I’m being overly harsh on this show just because I heard good things and was expecting something. What I got was a simple rehash of a show I’ve seen before. Granted, the animation is better and the character designs are OMG ADORABLE so much so that I will be collecting art of Ichika even if I never make it to the second episode. There are just so many of these shows out now that I don’t have the energy to care about this one. I’d rather re-watch Tenchi Muyo or Ah! My Goddess than experience a cheap imitation.