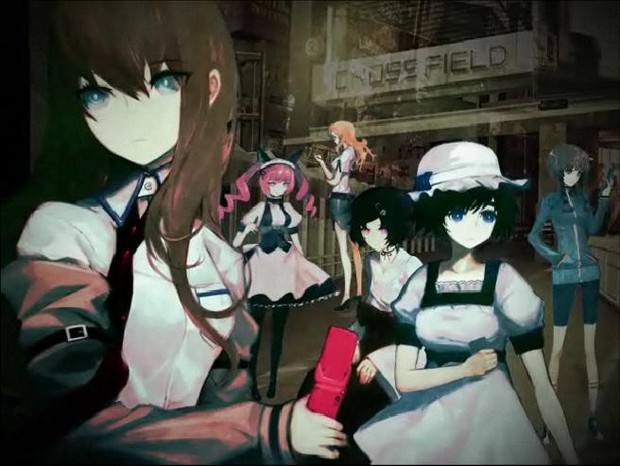 There are few things in the world I enjoy more than I good time travel story. Time travel offers a unique twist to a standard narrative, in that, events don’t always occur linearly. The events the characters experience are jumbled and due to this the plotting of a time travel story come out far more interesting than a standard drama. Steins;Gate takes place in Akihabara where a group of friends modified a microwave to send text messages into the past. Underestimating the consequences Okabe Rintaro, self proclaimed mad scientist, allows people to use the machine to change the past. What he discovers is that even altering the past slightly can completely change the world. 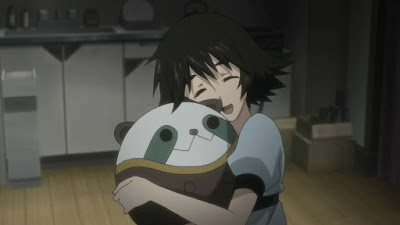 Steins;Gate is really two different shows. The first half is a Moe show with time travel elements and the second half is a time travel show with Moe elements. Strangely both work, for different reasons, and the transition from the lighthearted and fun atmosphere of the first half of the narrative moves smoothly when Steins;Gate suddenly becomes deadly serious. Such a change in tone is difficult to pull off, yet Steins;Gate manages it by having a fantastic first episode which encapsulates most of the elements that the series will represent going forward. The audience gets the insane antics of Okabe, the wonderful Moe of Mayuri, some of the deep time travel elements, technobabble, and murder. This execution is viewed in hindsight, however, as the first episode’s tonal imbalance may turn away overwhelmed viewers.

The element that really drew me into Steins;Gate was the use of internet culture as a hook, specifically using John Titor as the jumping point for the series. In late November 2000 a man who claimed to be a time traveler appeared on IRC and his claims have been immortalized on the internet. Steins;Gate’s hook is when Okabe notices that the first message they send back in time, accidentally, erases John Titor from existence. Going forward Steins;Gate uses pieces of the John Titor story has important plot points including the search for the IBM 5100, Titor’s explanation of how time travel works, and the year John Titor claimed to have been from; 2036. Prior knowledge of John Titor isn’t required to enjoy the narrative but you get a little extra out of the show by recognizing the references. 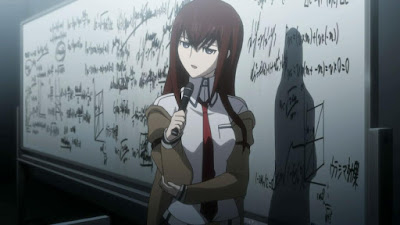 Early in the show Okabe recruits Kurisu Makise, a prodigy scientist, and together they develop and test the Phone Microwave and it’s unique ability to send messages back in time, called “D-mail.” Much of the first half of the show is spent on these experiments and on playing around with the show’s moe cast of characters. Being Akihabara, many of the characters are Otaku with classic Otaku tropes. Daru is a brilliant engineer but comes off as a lonely pervert, Mayuri is an adorable cosplay Otaku who works at a costume cafe, Feyris works with Mayuri and remains in her cat persona even outside of work, and various other characters. They’re enjoyable to watch interact and the characters who get a chance to change the world with D-Mail get backstories which crush the heart of the viewer and Okabe in the same fatal stroke. However, I never felt like the majority of the characters received any depth. Most of them simply work as plot devices to drive the narrative forward, provide a reason to alter the course of the world. Even when their backstories were explored I felt more for Okabe than I did for the individual characters because he had to explain that their wishes were harming the course of time, and he felt responsible for them having to undo their changes to the past. 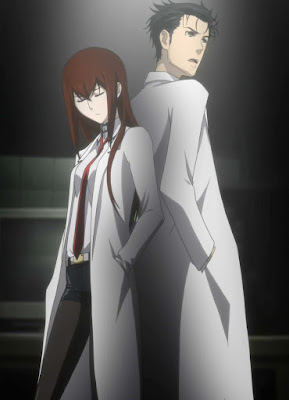 Kurisu Makise is also an interesting character. While she holds many of the stereotypical Tsundere traits she is given enough development to not only to overcome them but to somewhat justify them. Her secret obsession with 2channel gives her an interesting quark and the unintentional rivalry with her father both shows why she seems profoundly sad yet has accomplished so much at a young age. Even her first encounter with Okabe showed her range, at first she took a profound enjoyment out of proving him wrong and yet when he proved that time travel was possible she was humble enough to agree to work for him. I have a respect for characters who command respect and yet can be humble when they’re defeated. Mayuri offers an interesting intersect because while she is a character who exists as a plot device and doesn’t have much development you can’t help but fall in love with her. She is the sweetest, most gentle creature in the world, which works as a nice foil to the often abrasive and rude Okabe. She’s able to bring out a side of Okabe no one else sees which makes their relationship profoundly endearing.

Time travel is the main focus of the plot in Steins;Gate. D-Mails sent into the past don’t exactly change the future but shift the “world line” Okabe inhabits. He has the unique ability, conveniently, to remember all the world lines he happened to inhabit. His friends don’t notice any change because they’ve always existed in the world created by the D-Mail. So “Time Travel” for the majority of Steins;Gate is actually “world line travel.” Altering a small part of the past allows Okabe to jump between the world lines. Although later in the show more actual time travel takes place I enjoyed the plots created by the D-mails because of the mystery around what effect the message would have on Okabe’s world. One simple jump and an element he was relaying on, a driving focus of the plot for the early episodes, would just disappear forcing Okabe to completely rethink his strategy. In total, Steins;Gate uses three methods of Time travel; world line travel, consciousness travel where a person’s present mind jumps back into their physical body; and physical time travel where a character travels from the present into the past. Each of the methods are pulled off well with their own benefits and drawbacks expertly explored. 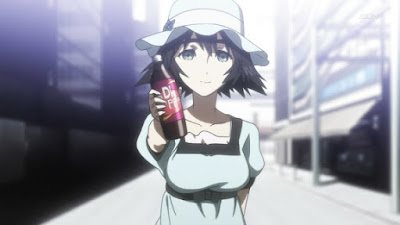 One aspect of Steins;Gate that I didn’t like is that the science changed when it became convenient to the characters. At one point Kurisu declares that her field of study was in the brain when she is first scene giving a presentation on physics and had, up to that point, only mentioned being a physicist. Another bit of rule breaking that irked me was they changed rules when the plot needed a rule to be changed. At first one Time Machine is limited to only travel backwards through time, which creates a depressing departure that the show spends an entire episode fixated on. Later a time machine of the same make has the ability to travel forwards and backwards through time, which gives Okabe an extra chance to change the past. It’s sloppy storytelling and bad science fiction.

I’ve discussed how well I think the time travel elements of Steins;Gate work, and indeed at its core this is an extremely solid Time Travel narrative. However, the moe elements are going to drive away people who would otherwise find the series enjoyable. The early episodes are light on the Sci-fi and heavy on moe characters doing moe things, the pacing is slow allowing the audience to spend more time with the characters. Each episode reveals one small piece of the plot. When that shift in the middle of the series happens Steins;Gate becomes a serious time travel narrative but getting there is going to prove difficult for someone looking for good science fiction right from the start. It’s unfortunate that by playing to the Otaku crowd who love both science fiction and moe, the audience who would most appreciate Steins;Gate won’t be able to make it through those first few episodes. 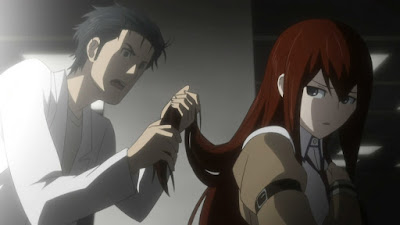 This review might feel a little negative but I can’t stress enough how much I enjoyed Steins;Gate. For all it’s failings, Okabe and Kurisu remain interesting characters and the way it employs the standard time travel tropes are always fun and entertaining. The dark, serious tone during the second half of the show is contains some incredible character drama despite the cast of mostly shallow characters. Okabe is forced to carry the burden of the narrative, being remembers world line jumps, that the depth of his character, what he goes through, and how he is profoundly changed by the end is truly moving. So while moe elements hold the show back and some of the science fiction elements are weak, the show comes off as a definite watch for science fiction and moe fans alike. No where near a perfect show, but an entertaining and moving piece of animation.