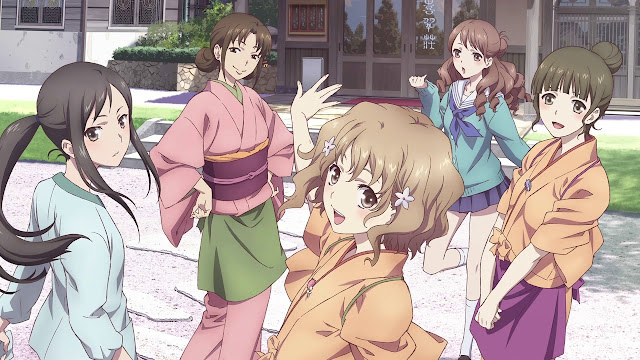 With so many Anime drama’s being built around horrible cliches and stock character designs it’s refreshing to see a show that thrives for realism above recycling tired old anime tropes. P.A. Works celebrates their tenth anniversary by crafting a show that is closer to a live action drama then traditional anime drama. Does their attempt to bring a realistic drama to modern anime work or does the show falter? Ohana Matsumae is a sixteen year old girl forced to mature faster thanks to her less-then-ideal mother, Satsuki. When Satsuki’s boyfriend becomes involved in a crooked deal they’re forced to flee Tokyo sending Ohana to stay with her estranged grandmother at a traditional Japanese inn. Ohana needs to work, learn to deal with people, and attempt to repair the relationship between Satsuki and her family. 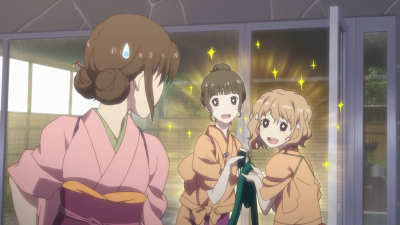 There is a beautiful simplicity to Hanasaku Iroha. It doesn’t relay on any of the standard anime tropes or set ups, it doesn’t seem to be one of the many shows that wants to appear to the niche anime audience through their fetishes, and it doesn’t seem to care about wish fulfillment. At first glance, I expected all of these things from the show and it surprised me by avoiding all those traps of most recent anime. It has been hard to find shows that don’t reflect some of those problems, even from modern quality anime. Hanasaku Iroha strives for realism and after spending a short time with the characters and living in the world for a bit they’ve definitely hit the mark.

The show centers mostly on Ohana and her move out to her grandmother’s inn where, to her surprise, she is put to work. Quickly the staff challenge her world view and force her to reflect on some of her actions up to that point, especially romantically. Ohana seems like anything but a selfish character, but the tiny flaw that is exposed is exasperated when she is placed in a new location surrounded by new people. Her tiny ability to be inconsiderate is placed in the spot light and undermines her first impression of the inn. The starting point is a flaw, and the flaw is not obvious or overt but simply a normal flailing of an adolescent girl. Something that all children have to grow out of in other to adapt to new surroundings. Ohana is a relatable and likable character because the series captures her as she readies herself to become an adult. 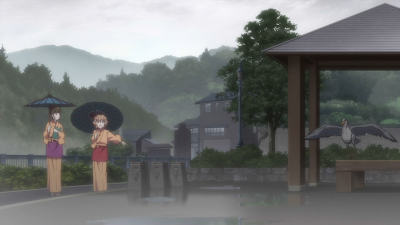 The animation is vibrant and the backgrounds contain an incredible amount of detail. Being the anniversary work of P.A. Works clearly the studio dedicated a large amount of time and resources into crafting the best looking show they possibly could. The animation aids in the immersive feeling of the narrative and the audience gets lost in the beautiful sights around the hot spring village. The contrast between different inns or the city versus the country are enhanced by the amount of care taken to craft specific details. The designs of the main female cast are all cute without falling into cliche and the personality of the entire cast can be deduced by simply looking at them, the goal of all great character designs. 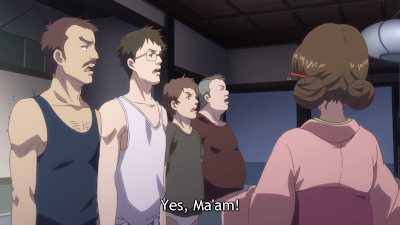 Narrative style in Hanasaku Iroha is a combination of standalone episodes that are united with a unifying thread.There isn’t exactly an overarching story that ties the entire series together, rather there is an overarching theme that is planted in episode two and then is slowly cultivated over time, coming to a beautiful crescendo in the finale. However, there is some continuity that begins in seemingly stand alone episodes and end up effecting later events. It’s a great way to construct a slice of life show where there isn’t a strong narrative, the show is moved by the strong characters, but the author still wants t o create a sense that everything that happens in the series matters. That the events of the show affect the characters in a meaningful way. The fantastic part about the stand alone episodes is the shows ability to use them to craft some fun scenarios within the construct of the show. The best one being where the head waitress is determined to get fired and treats a group of rowdy military otaku guests rudely. The guests, however, being obsessed with all things military loved the harsh treatment. The episode is one shining example of how the formula can be flexible while still crafting a cohesive narrative. In the second half of the series this principal is carried over except standalone episodes before rarer and two or three episode arcs follow this same pattern. They seem like a contained story yet small elements work in subtle ways to aid the unifying narrative. 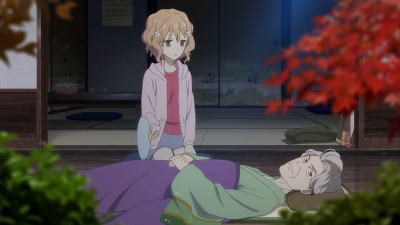 While most of the characters in Hanasaku Iroha are vibrant and interesting there are some points that subtract from the experience. As with a lot of anime I complain about I don’t think we get to see as much of the secondary characters as we might have, and much of the time we do get to experience the secondary characters it is through the filter of Ohana or one of the other young girls. I wanted to live with the chef or his assistant and really get to know them. With most of the characters the small bits were charming, at least, but there is a relationship between the managers son; Ohana’s uncle; and his college sweetheart that I found trying. On one hand I think Hanasaku Iroha was being realistic in crafting a relationship that seemed to come from benefit rather than love but up until that point I didn’t see the pair has anything more than friends or business partners, even if the young master was a little obsessed with the woman. They never even shared an onscreen kiss at that point and showed no affection for each other. It didn’t feel right and took me right out of the narrative. 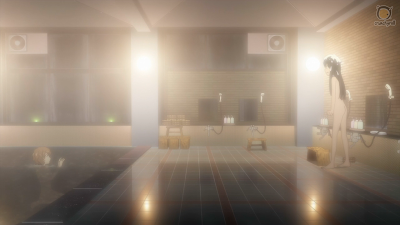 The last few episodes, leading up to the finale, are heart warming tearjerkers but is also where the few cracks evident in the series start to show. The manager makes a decision that the staff disagrees with and Ohana accidentally finds herself on the other side of the argument. I thought that most of the characters broke form in those moments. Ohana for not being gung-ho against her grandmother, the staff for being so bitter and hostile, the manager for blatantly ignoring the rational arguments against her decision. In the heated moments it just felt like climactic drama for the sake of climactic drama and ultimately fell flat.

Hanasaku Iroha is a fantastic, realistic, and beautiful drama which is worthy of being P.A. Work’s tenth anniversary work. The animation is some of the best the industry has produced, character designs are exceptional, and the narrative avoids anime cliche’s and traps in favor of realism. While the mostly solid character drama has some detracting flaws and the drama inserted to build towards the end feels contrived, it doesn’t take enough away enough from the series to spoil the experience. It’s a part relaxing, part stressful, part fun, but will leave any audience with a satisfying warm feeling in their heart.