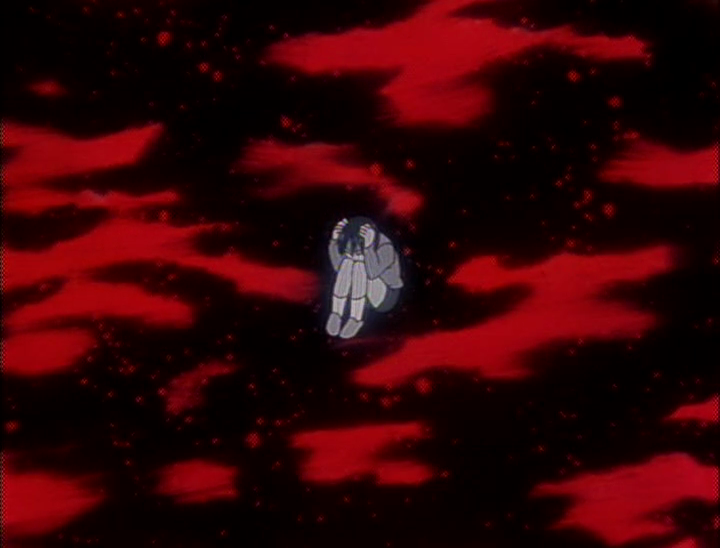 His and Her Circumstances, or Kare Kano for short, is famous among Otaku for being the final piece of animation directed by Evangelion creator Hideaki Anno, who left the project before it had finished due to disputes with advertisers and the author of the original Manga, Masami Tsuda. Which is strange because she, supposedly, claims she was unhappy with Gainax’s focus on the humor and not the romance. After watching the show I doubt that was the only thing she was uncomfortable with in the adaptation. 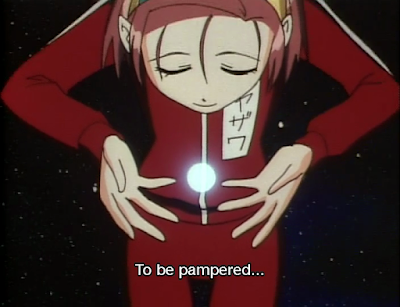 Kare Kano is an odd show, not odd in the sense that it’s a weird or hyper active like some recent Gainax titles. It’s odd because the core of the story is a generic Shoujo anime. Yet, Anno takes what could have been a simple romantic comedy and transforms it into a commentary on the nature of relationships and how they effect and charge individuals. A few episodes in the post-Evangelion style of Anno is apparent. Elements reserved for some of Evangelion’s more spectacular episodes are used in Kare Kano with abandon. These include sketches, dialogue as text for emphases, still frames, long sequences of inner monologue, manga frames, and abstract animation meant to symbolize a character’s mental state.

Lets try to go back to the time and place and get into the head of Anno as he starts to direct Kare Kano. It’s the year 1998 and he just finished creating one of the most influential anime of all time, one that’s colossal impact is still being felt over fifteen years later. Then he was allowed to refinish the ending of his masterpiece with a huge budget and again creates a masterpiece that pushes animation forward narratively and stylistically. Gainax will never raise higher than the peak they reached in the wake of End of Evangelion. How is Anno rewarded for these accomplishments? He gets to adapt a Shoujo manga.

Kare Kano is unique for Gainax. It’s the first straight Shoujo title that they’ve done and the first time that Gainax has ever adapted a previously published work. So Anno was being challenged in one respect, but he was also being restricted to a set source material. Not that it stopped him from being Anno. 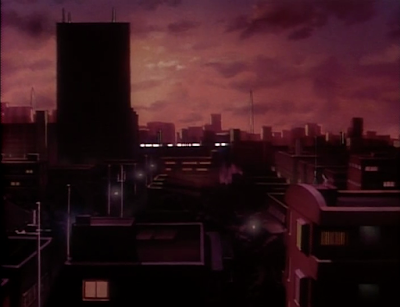 I’m going to a bold statement: Kare Kano is one of the most innovative piece of animation I’ve seen. I’m not saying that Kare Kano is a better show than Evangelion or Anno’s previous works but the way he approached Kare Kano is able to turn what is a rather generic Shojo into a visual and emotional thrill ride. The way Anno works with the characters and builds the relationship is unique, especially in Shojo, and taking a simple romantic comedy and transforming it into a physiological character study that Anno perfected in Evangelion.

I wouldn’t be a proper Evangelion fan if I didn’t notice the constant references to Anno’s previous work. The first one happens only minutes into the series where Yukino’s is giving her opening monologue and strikes a pose that emulate’s Rei standing over the earth in End of Evangelion while a glowing white ball appears in her hand to make the picture complete. Anno reuses Evnagelion sound effects, music, recreates pieces of animation, and references Evangelion throughout the series. The chief reason these are in the series, I believe, is to give a nod to the Gainax fanboys and allow Anno to trumpet his own work. There is also a note of sadness to the Evangelion references, as if Anno lamented it being over and regretted working on his current project, but I might be projecting. 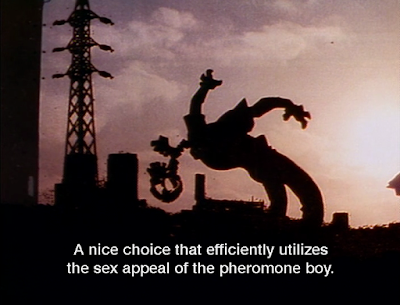 It’s clear why Anno would have been interested in Kare Kano’s narrative. In Evangelion, Anno dealt with a handful of characters who are defined by their duality. Shinji built up a wall around himself in order to hide from his Father’s rejection while pretending to hate him and Asuka coveted the praise of others because of her own struggles with an absent Mother. Kare Kano’s two main characters deal with similar issues. Yukino loves to be praised and adored so she puts on the persona of the perfect student. Flawless appearance, perfect grades, willing to help, member of every committee during special events, and beautiful. However, when that position is challenged by the equally smart Arima and she losses first place her entire persona begins to unravel. She has to work even harder to maintain her grades because holding that number one position is the basis for the entire character she constructed for herself. The breaking point only comes when she learned that Arima, the seemingly perfect Arima, is putting on a show of his own.

Arima’s desire to hide his true self comes from an abusive childhood which ended when he was taken away from his parents and sent to live with his Aunt and Uncle. Feeling ashamed at himself for his own childhood and carrying the burden of his parents, Arima attempts to make up for those aspects of himself by excelling at school and sports while attempting to not being a burden on his adoptive family. 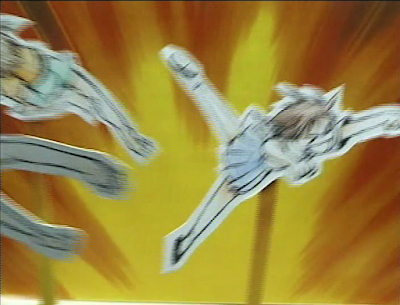 The two characters struggle with their duality in some breathtaking scenes which explore the character’s personalities and back story in amazing detail. Anno doesn’t hold back in exposing these character’s flaws, completely cracking apart what had previously been presented to the audience. That is the exceptional aspect of Kare Kano, it goes far beneath the surface of the characters and roots the relationship deep in the psychology of the characters. They become the only people who they reveal their true selves to and in doing so the two share a connection that Yukino has only had with her family, and Arima has never had with anyone.

The most impressive part of Kare Kano is that it’s the most realistic romance anime I’ve ever seen. The relationship progresses smoothly; Yukino and Arima start off hating each other, then they become friends, followed by falling in love. Even after they admit their feelings the progress continues to dating, to needing to be around each other, and finally through the stages of a physical relationship. The majority of Shojo spends far too much time on the first few parts of the relationship, so much so that most series end after the main characters confess their feelings for each other or share a single kiss. When I hear romance anime I think of misunderstandings, love triangles, and endless dead ends. Kare Kano gets through that in the first ten episodes. Of course the narrative is the work of Masami Tsuda, but the way Anno builds the characters before the relationship even begins makes the progression of their relationship all the more satisfying. 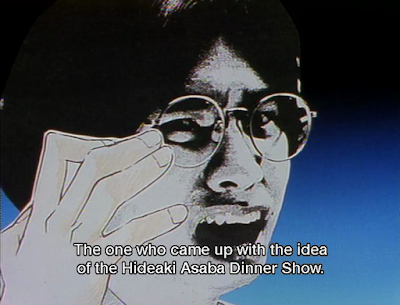 Anno also takes some serious risks with the animation style. My experience with Shoujo is that directors traditionally don’t get excessively artistic but rather play the animation straight and add a healthy amount of sparkles. Outside of his Evangelion-esque psychological scenes there are episodes that feature heavy use of still images, sketches of characters with text, and was able to sneak in still photography.

The most interesting episode, Episode 19, comes from one directed by Anno’s protege Kazuya Tsurumaki, who took over the series once Anno left. It’s a completely insane mash up of styles using photographic backgrounds, featured all the characters in a crayon like style, and had hyperbolic scenes animated using paper cut outs on popsicle sticks. The episode probably represents a time crunch caused by the departure of Hideki Anno, but it certainly is left as a testimony to the abstract levels in which Gainax is capable. Not until Panty and Stocking with Garterbelt have I seen them use alternatives to standard animation, yet here they combine standard animation with a host of other styles to create a visually jarring and yet thought provoking piece of art. 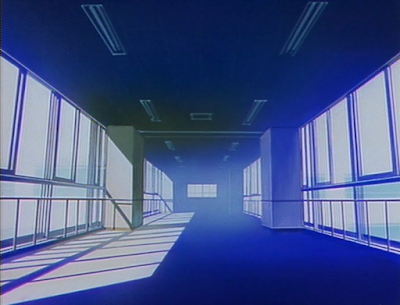 Much of the nonromantic aspects of the seres pale in comparison to how Anno handles the characterization and relationship between Arima and Yukino. The middle of the series concerns side stories where Arima is noticeably absent, and Anno seems to adapt these episodes straightforward as opposed to making them his own as he did with the first half of the narrative. It doesn’t matter anyway, as the series abruptly ends and will never be continued by Gainax, as requested by Masami Tsuda. It’s a shame Anno didn’t get a free hand to do whatever he wanted with the series as a whole piece, but even beyond that, the anime no ending but just closes in the middle of the “14 day” arc where Yukino and friends are preparing a play for the cultural festival. The anime covers the preparations for the festival, but ends right before the festival begins. The play sounded like a new opportunity for deep character study and while I could read the manga to find out how the “14 days” arc plays out I would have liked to see Anno or Tsurumaki tackle a play within an anime that reflects on the characters. That seems like an ideal situation for the director to craft. Alas, it was not meant to be.

Kare Kano is, ultimately, an experimental anime for Anno that ended poorly. The core story and characters are solid but enhanced by the narrative and visual techniques of a master animator. Anno brings his craft as a director and the Gainax staff to their absolute highest and it’s a shame that the unstable Anno was unable to finish working on the series and, until the first Evangelion remake in 2007, retired from animation all together. If Anno ever returns to the Directors chair, for something that isn’t Evangelion, I think the world is in for a treat.

One thought on “His and Her Circumstances: Building on top of Evangelion”