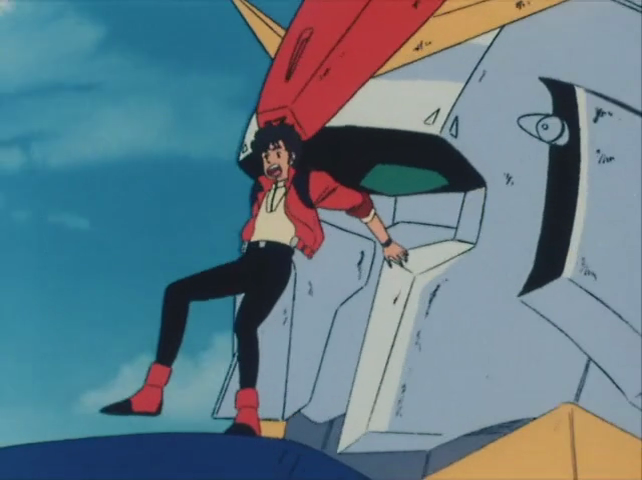 I was warned. Cautioned. Told, specifically, that Double Zeta Gundam was not something that I wanted to experience. But I made a pact with myself. A sworn vow. I was going to watch all the Universal Century Gundam! As an anime fan, as someone who has used the screenname “Gundampilotspaz” for the last ten years, I need to at least have seen all of the shows in the original Gundam universe, right? Well, even Bandai must have had better sense than I did going into this series. Double Zeta Gundam is the only chapter of the original UC Gundam that has not been released in the United States. Maybe I should have taken the hint?

After the success of the reedited Gundam trilogy movies the new 50 episode Zeta Gundam series was massively successful. Ending on a cliffhanger, the show needed a sequel in order to conclude narrative threads started at the end of the series. So enter Double Zeta Gundam! However, from the first episode the series takes on an obvious tonal shift. By the end of Zeta Gundam, the show had become exceptionally bleak. In fact, the show ended with Kamile, the main protagonist and Gundam pilot, mentally damaged after his final battle with Haman Karn. While the Titans are defeated in the final battle the return of Zeon promises that the work of the Argama crew is no where near complete. 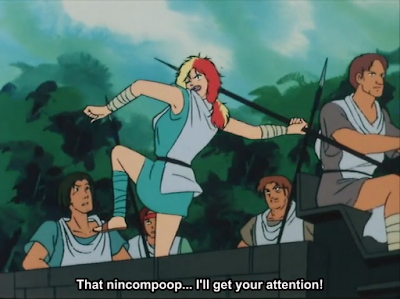 Double Zeta begins by quickly having Kamile rolled off to a hospital, leaving the Argama without a main pilot. The damage to the ship and crew looks bleak but we are introduced to an entire new group of young men who have mobile suit experience! Unfortunately for the Argama crew, they are more interested in stealing the Gundams and scraping them for profit than fighting the forces of Zeon. The first six episodes or so follow this pattern: Judau and his friends manage to steal Zeta Gundam and scrap it, Zeon appears and attacks, Judau defeats the enemy, the Argama somehow gets the Gundam back. That is the pattern for the first six episodes! The most puzzling aspect is in most of the battles they keep coming up with reasons to leave the cockpit doors open. Sometimes it’s because Judau isn’t sure how to close to hatch, other times the Zeon officers take mobile suits that don’t have doors installed. For some reason, Tomino decided that for the first few Gundam battles the hatches had to be open. Humor? It might be humor?

Those first few episodes are also filled with the poorest slapstick humor I’ve ever seen. The Zeon commander’s incompetence is supposed to be funny, the fact that Judau is constantly able to steal the Gundam is supposed to be funny, and there are scenes where the Gundam’s themselves are the subject of slapstick humor including one horrible scene where Zeta Gundam gets it’s head stuck in the ceiling of the hanger deck while the audience is treated to a shot of it’s flailing legs. Even after the first ten or so episodes the comedy stays around and seems to be the driving force behind the narrative. 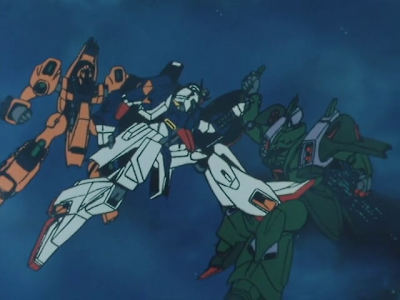 When the more serious piece of Double Zeta begins we’re introduced to a character named Chara Soon who is a high ranking officer in Haman’s new Zeon army. She seems to be a rational, obedient officer… until she gets in the cockpit of a mobile suit. Once piloting a mobile suit she looses her mind with battle lust, caring only about fighting and winning. This, to say the least, destroys any credibility the character had. I’m convinced that it was some kind of meta joke Tomino snuck into the series. Outside a Mobile Suit, Chara Soon hates violence and wishes the war is over quickly. Once inside all she cares about is personal victory. Is Tomino providing commentary on on his own characterization? It’s possible, but the audience has to dig deep in order to come to that conclusion.

Once the series crosses episode fifteen it improves by a good measure by actually returning to the main antagonist of the show, Haman Karn, and working on a huge subplot where Judau’s only goal becomes the return of her kidnapped sister from Zeon Officer Glemy who is using her for …something? Honestly, I never quite understood why he kidnapped her. He seemed to be preparing her for live in the Zeon court but why he would pick a random orphan girl from a backwater colony to be a member of the Zeon court is beyond me. It seemed like Glemy’s obsession with the girl was an excuse to give Judau a reason to continue fighting with the Argama, and nothing more.

Hands down the most frustrating part of the show is that no one learns from their mistakes. Early, the Argama allow a group of kids to steal their highly advanced combat ready Mobile Suits effortlessly …several times! Once Judau joins the Argama crew this doesn’t stop. People seem to just take off in a Mobile Suit whenever they feel like, disobeying orders in the process. Captain Bright’s answer to this is to shrug and have a “boys will be boys” attitude. Does anyone remember what Captain Bright did to Amuro Ray when he took the Gundam without orders? He tossed him in the brig! Yet he allows any member of the Argama Crew to just launch in any Mobile Suit they want while he sits in his Captain’s chair mumbling, “No, stop. Please don’t do that. Hey, be a friend.” 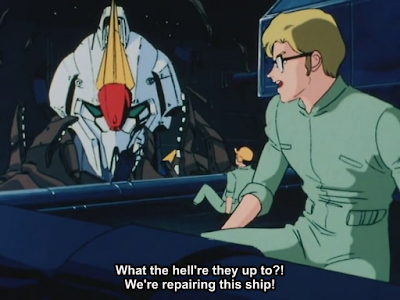 There is so much not to like about this series, but those come from the characters and the narrative. I found the majority of the battle scenes in Zeta Gundam to be paint by numbers and repetitive while in Double Zeta they were more consistently exciting. The animation is also a step up with the Mobile Suit designs taking another wide step forward. Granted, I would have preferred the Double Zeta Gundam not separating into it’s three components quite so often because, at times, it just didn’t make tactical sense and harmed Judau’s chances of winning the battles when it was employed.

The last twenty episodes have a lot to like in them. The small side stories on the earth are well written and entertaining. They also give the audience a good slice of how much the on going war has affected the Earth as well as what the remains of the original Zeon occupation have been doing since Amuro Ray’s oringal victory. The episodes that are great step away from the crew and do character studies on people who have been affected by some aspect of the war. One such stories follows a woman who lost her boyfriend in the last war and has been outcast from her community for being associated with the Zeon.

The second half of the series comes to a glorious climax at episode 35 when it’s learned the Haman Karn will drop a colony on the Federation base in Dublin. It’s a two part episode which covers characters preparing for the event, trying to evacuate Dublin while an unhelpful Federation celebrates the population decrease the attack will cause and Zeon forces try to prevent refugee ships from escaping. After the colony drop the desolate waste of Dublin becomes the battle ground for an epic fight between Double Zeta and a Zaku 3, then the Double Zeta and an allied Qubeley fight the tremendously powerful Physco Gundam around the crumbling remains of the fallen colony. The battle was exceptionally choreographed, the animation was stunning, and it held some of the few genuine emotional moments of the series. They are perhaps two of the best episodes in all of UC Gundam. 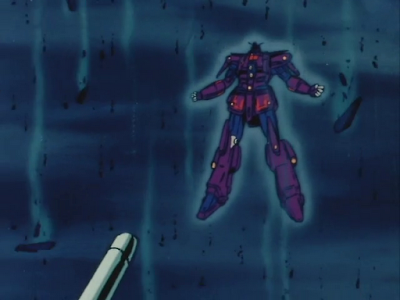 The series then destroys that momentum by inserting some filler where Haman Karn sneaks aboard the Argama for no reason, as well as the return of the Moon-Moon priestesses which appeared in an awful two part episode during the first half of the series. By the time the last shoe was dropped, Glemy attacks Haman Karn and begins a Zeon civil war, the event falls flat. What should be an epic moment and an epic battle is weighted down by bad pacing, poor character construction, and a lack of stake for the outcome of the battle. While the action was fun and exciting, it felt like Mobile Suit battles for the sake of Mobile Suit battles at that point in the series.

So, is Double Zeta an attempt by Tomino to sabotage the Gundam franchise as some fans suspect? Well, I don’t think that’s true. It certainly is an attempt to create a different type of story in the Gundam Universe, to insert some comedy instead of being consistently dark and foreboding. But it just didn’t work because the audience is expecting the series to pick up right where Zeta Gundam ends and conclude that narrative. Much of the series, especially the early part, is filler that was created to fulfill Tomino’s contract so he can move on to what he really wanted to create: Char’s Counterattack. Char is obviously Tomino’s favorite character and without him in this series, it felt like he just doesn’t care. The main story is still as good as Gundam will ever be but it’s hidden behind bad characters and poor pacing.

Should it be watched? Probably not. Maybe the final fifteen or so episodes are worth watching or if one wished to be a Gundam completest for the sake of being a Gundam completest. There is just too much wrong with the series to make the few moments they get right be worth the time investment.