I’m four weeks late. FINE! But I had a crazy month and lots of content coming in video and podcasts and a few more reviews that I’m really excited to post. I only watched five shows, I think that is going to be the standard going forward. So here is my Summer Preview! I picked shows I wanted to watch and shows I saw that were excessively decisive. So, here we go! 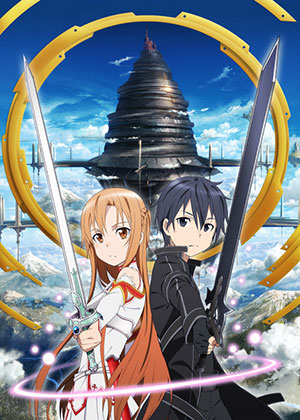 In the year 2022 the new Virtual Reality Massively Multiplayer Online Roleplaying game “Sword Arts Online” is released and bought by ten thousand dedicated gamers. In a twist the game designer has turned the game into a death match where players must reach the 100th floor of the game without dying, and any attempt to leave the game will cause their death. Kirito strives to use his experience as a beta tester to stay ahead of the rest of the players and reach the end of the game. 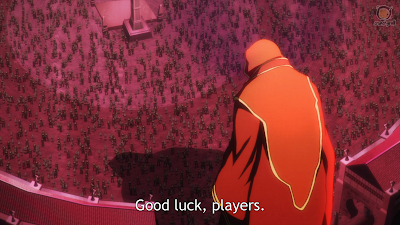 I came at this show tainted by the memory of .Hack//sign but the show does a good job of building a realistic situation with the types of people who would obsess over the new release of a hard to get game. There are some beautiful little moments that, as a gamer, I appreciated. The scene where the pristine, beautiful avatars fade away replaced by what the players actually look like takes on a whole range of standard gaming tropes from the young kids to the unkempt twenty somethings. The best is the female characters who suddenly became old, balding men. It rang a little too true.

The little interfaces that pop up, from the game menus, experience information after battles, and life bars take the audience out of the beautiful fantasy world that the characters have been placed in, which is exactly what they are designed to do. The show wants the audience to be reminded that they are in a game, and those little touches destroy the emersion of an MMO and they are a constant reminder of the show’s set up.

I’m worried that once the show starts it’ll devolve into standard fantasy combat but right now the setup is enough to keep me interested for a few episodes. I like the main character, the isolated, lonely gamer; and I can’t wait to see if it turns a rather monotonous sounding task; clearing 100 levels; into something exciting to watch. 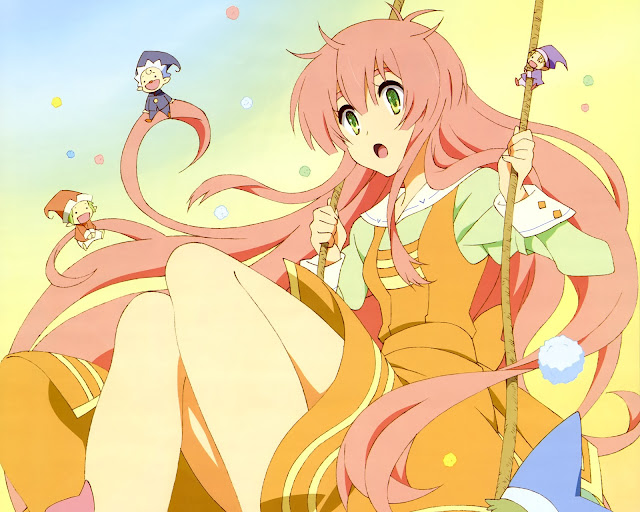 Centuries after the decline of humanity a race of fairies is the most powerful species on Earth. They are friendly, and seem to want to help the humans as what is left of humanity struggles to survive as food becomes scare and the necessities of life are disappearing. Suddenly products from the “FairyCo” start appearing in town and the unnamed protagonist; a mediator between humans and fairies; is tasked with investigating the origin of the mysterious food. 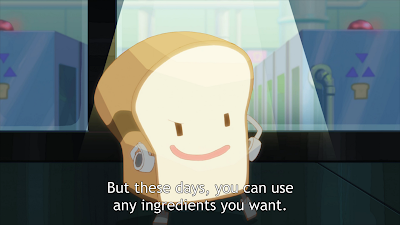 The show works on several different levels. At the very basic level it has an “OMG CUTE” factor thanks to the adorable fairies and their obsessive nature. Beyond that, the humor gets pretty deep. There are satirical elements where the show comments on bureaucracy and human nature in a dark way considering that set up of the show sees most of the human race dead.

The art is bright and cute, the light tone is matched by the simple designs of nature and the fairies and is contrast with the dark comedy by displacing the messy and chaotic offices of the bureaucrat. The character designs are adorable, especially of the Fairies who have a mix of creepy and adorable look to them as they don’t seem to be capable of an expression other than a massive smile.

The episode concludes are the protagonist is starting her investigation into the FairyCo with a scene that I won’t describe here because it needs to be seen, not ruined. It sets up a third level of humor for the series; complete absurdity.

This show is difficult to explain, a unique piece of art even among the strangest of series that have come from Japan. It’s definitely worth checking out, if for nothing else than to see how crazy the show can become with such a loose premise and writers who seem to be able to do anything they want. 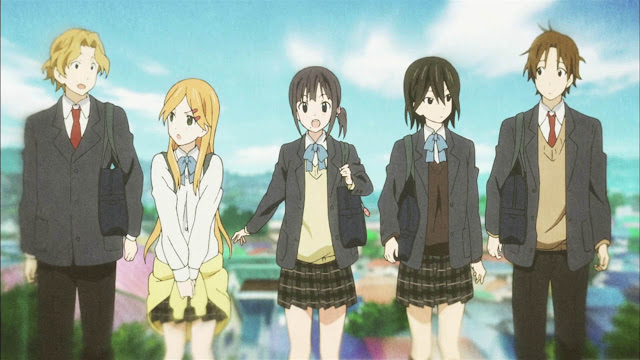 Five characters with different interests come together to form a Cultural Club. Suddenly, the characters start to switch bodies through some unknown effect. 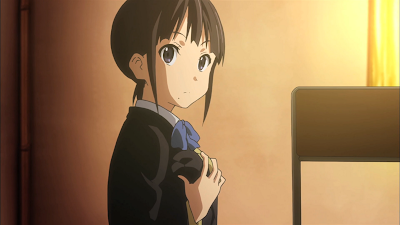 The main problem with Kokoro Connect is that we are only just introduced to the characters before the body switching effect is introduced. So we really don’t know these characters when they start to talk about their personalities switching. Ultimately, no one character is interesting and the first episode features mostly gender related jokes. The first pair that switches has a failed romance going on between them and the second switch features the obvious joke when the male character is transferred into the female character’s body, he is suddenly shocked and enthralled by the fact he has boobs.

The aspect that is hard to get over is that the character designs are lifted right from K-On!, both shows feature character designer Shiromizakana except that the animation quality is a noticeable step down from the high standards of Kyoto Animation. When the characters are sitting around the club room table and idly chatting I can’t help but think that it is just a cheap way to take advantage of a built in audience looking for their next moe fix.

The show is a group of characters sitting around a table blandly talking about the weird fact that they are switching bodies. If there was some development before the body switching it might be an interesting concept, or if the concept was added to an existing show like K-On! it might work as an arc. As a standalone show? It just hasn’t built compelling enough characters to make the hook interesting. 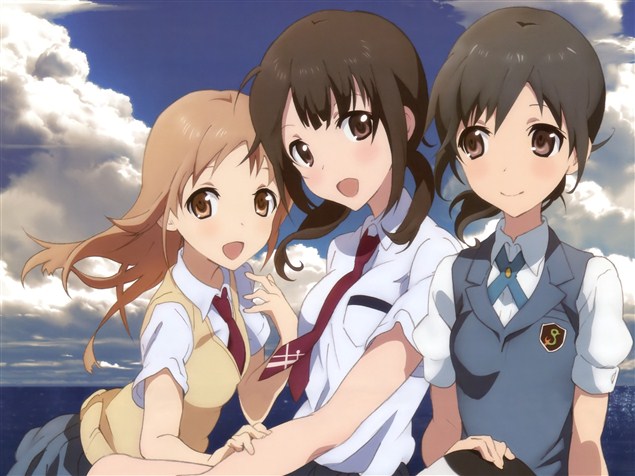 Konatsu Miyamoto leaves the choir club after being told she won’t be able to participate in a public performance due to her struggles with stage fright. She starts her own music club and begins to recruit others; Wakana Sakai a talented singer who refuses to use her talent, Sawa Okita who is Konatsu’s best friend and obsessed with horses, Taichi Tanaka the only member of the Badminton club, and Atsuhiro Meada a transfer student from Austria. 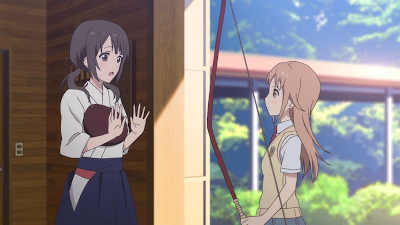 This is the second show in the summer season that is being compared to K-On!. This time it isn’t in aesthetics, in fact this show’s art is incredibly dull. The scenes start to blend, the colors are muted and boring, and the worst is that all the character designs are essentially identical. I had trouble keeping track of the characters because of how similar they were in appearance, even between different genders!

The story is also bland. There are some interesting opportunity for character development, especially with Wakana Sakai, but this first episode didn’t do enough to build up any one character to the point where I’m compelled to return. The most interesting character to watch was the transfer student and that was only because his misunderstanding of Japanese customers were humorous.

Tari Tari might develop into a show worth watching. It has the buds of interesting characters and a hook to bring these characters together. This first episode does nothing to lead me to believe that they’ll take advantage of any of the potential they’ve laid out. I don’t think Tari Tari will be a bad show, but it will be a bland; average show at best. 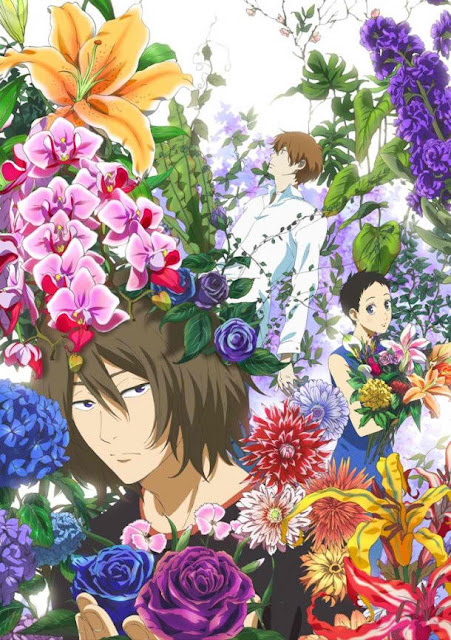 In order to become closer to Rokka, owner of a local flower shop, Ryosuke jumps at the opportunity to work for her part time. Finally, after six months of working for her, Ryosuke is invited upstairs to her apartment where he stumbles across a half naked man. Disheartened, Ryosuke soon learns that this isn’t Rokka’s live in boyfriend but the ghost of her late husband, Atsushi, that only he is able to see. Ryosuke is determined not to give up on her even with her dead husband desperately trying to stop him. 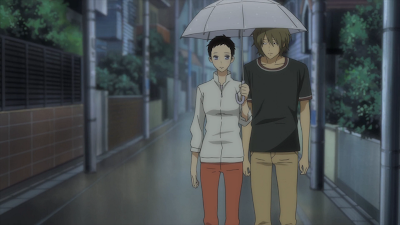 I’ve watched much further than the first episode of Natsuyuki Rendezvous so I will be brief so I don’t give anything away: This is the best show of the season. I love the characters; Rokka is an adorable character with a strong determined will to succeed fueled by the loss of her husband. Ryosuke is a sweet guy who just wants to get close to Rokka and actually makes progress towards her!

Natsuyuki Rendezvous is the most realistic romance I’ve ever seen come out of Japan. There is a scene in the first or second episode where Ryosuke confesses his love for his boss. This isn’t treated like the biggest event in these character’s lives like it would in so many high school based anime, Rokka nods and doesn’t answer; they simply go on their way to lunch and then back to work. Rokka takes her time in considering the proposition like an adult would; an adult who hasn’t dated in eight years due to a tragic loss.

It’s refreshing to see a realistic romance anime once in a while. I’m always shocked when I do see one and I give it extra points for trying. The added layer of having Ryosuke battle against Rokka’s dead husband makes it all the more compelling. The ghost lingers around the house just as Rokka’s love for him has lingered over the years, and like her own feelings the husband is getting in the way of her moving on to a new partner. I look forward to watching how the series plays out, and how the relationship develops going forward.