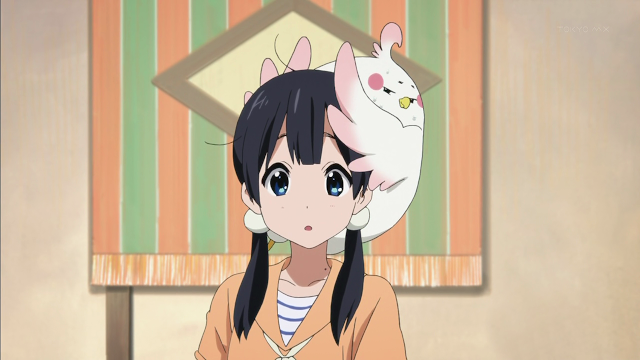 Kyoto Animation is known for creating the most popular anime among the serious, hard core Otaku in Japan. It’s hard to believe that they haven’t attempted to create an original work before Tamako Market. They’re success has come from taking already popular work among those handful of hardcore fans and applying their animation ability to it. Tamako Market represents their attempt to apply what they learned from their adaptive works and try to create something without the need of outside licenses.

Tamako Market is about Tamako Kitashirakawa the daughter of a Mochi seller at a shopping district. The show mainly follows Tamako and her family as they go about their lives in the shipping district. The one odd thing the show tosses in is the introduction of Dera, a talking bird who is on a quest to find a bride for the prince of an island nation. 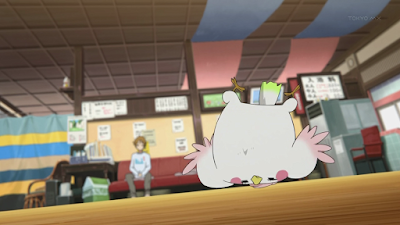 Dera acts as the viewpoint character, and is constantly making comments about the situations he finds himself in. His role goes from being the central focus of the narrative to a sideline character to the normal routines of the Shopping district. The show is structured with a breakneck pace with an entire year taking place during the twelve episode series. The show covers favorite Moe anime tropes, including a valentines and beach episodes but moves far too quick for any structured narrative to develop. Instead the show focus’ in on it’s characters. Tamako herself represents the idealized Moe heroine, always cheerful and always optimistic. The side characters are far more interesting from her eccentric carpenter friend, the rivalry between the two Mochi shops in the district, or the beatnik café owner, their brief moments on the screen spoke miles as to their personalities and their roles in the tight nit community of the shopping district.

So while Tamako and friends play through their typical Moe storylines a richer experience is developing just under the surface, the background characters that are encountered briefly in each episode start to snowball so that the entire make up of this shopping distract begins to come to life. This group of individual stories about cute girls shopping or building a haunted house is united by a rich theme of community and what it means to live and grow around a group of people. There is a speech Tamako gives towards the end that makes it clear that the show is not about Tamako herself, but about the market. The year the audience gets to live through is only a tiny bit of its history, Tamako has lived and grown with these people in this place her entire life and the rich assortment of personalities and professions leads to a greater whole than a family living a secluded suburban life style. 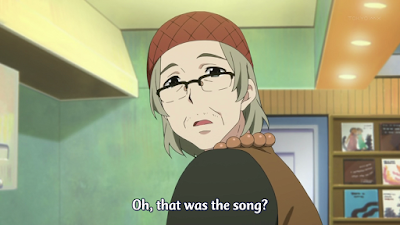 There is also a second thread that runs through the show and that is the theme of change. My main complaint with the show is nothing really seems to happen, it ends one year after starting and it might as well have been the same day. Tamako has learned very little and no major event changed anything about the Shopping District. Then the question of Dera, the talking bird, left a bad taste in my mouth. Why a talking bird?

Dera I believe represents a major change that happened to the market. A normal family gets visited by a talking bird and while at first it’s focused on, soon after it becomes folded into routine. The characters go about their daily lives as if the bird was always there, they learned to adapt to the weirdness of the situation. The opposite side of this coin is when a major even threatens Tamako’s life in the Shopping district it turns out to be a false alarm. The show’s message here is that sweeping, drastic change doesn’t really happen. Even when major change happens, like a talking bird flying into their lives, they simply adopt their lives around it and continue on.

This simple message addresses one of the biggest holes in Tamako’s life, her mother. She died a few years before the show begins and throughout the series it becomes clear that while the absence is left, one particularly touching scene with Tamako’s father drives that point home, that the characters do not dwell on the absence. The change is eventually accepted and folded into the new reality of their lives, just like a talking bird quickly stops being novel and folds into reality. 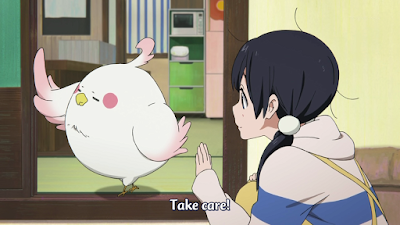 The more I think about Tamako Market the more I start to see the subtle brilliance of the show. However, I would have liked Tamako to be a bit more of a character and many of the side characters who are interesting don’t get nearly as much time as I would have liked. A lot of the threads and build up established early on don’t go anywhere. Tamako’s love interest, established in the first episode, barely plays into the narrative and it’s barely referenced even in the final episode. Even though I managed to find a deep theme running through the show that doesn’t excuse some of the boring and poorly executed ideas and characters. But it’s cute, and it has a lot to say about community and how strength can be found as a group of people live and grow around each other. Moe fans will find a lot to like in this show but it won’t be converting anyone not already invested in the genre.