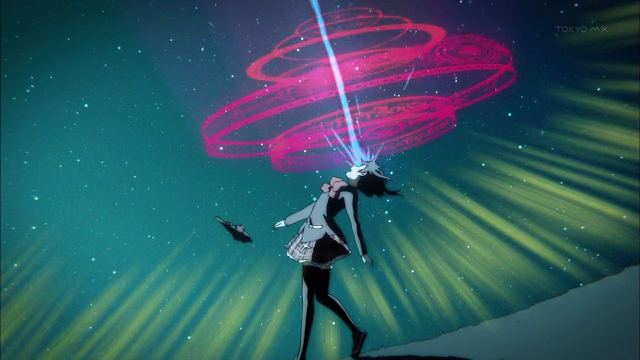 Chūnibyō Demo Koi ga Shitai!, known in English as Love, Chunibyo & Other Delusions, is a coming of age love story like so much anime that has come before. But the slight tilt that Chunibyo takes on the formula is placing the main love interest in a period of adolescence known as “Chunibyo” in Japan, where a person begins to believe their own delusions of having magic powers or being from another dimension, or any of a long list of like delusions. Yuta Togashi is a boy who has decided to leave his delusions behind and live a normal life, and to that end goes to a high school far enough away as to guarantee no one who remembers his previous life will attend. On his first day he meets and becomes connected with Rikka Takanashi, who is lost deep in her own delusional world. 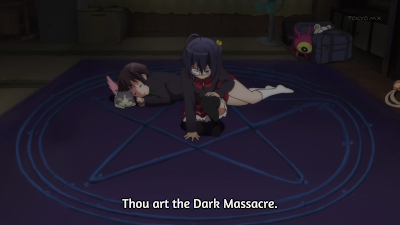 The show builds on the relationship between Yuta and Rikka with the tension comes from Yuta being sympathetic to Rikka but wanting to attempt to live a normal life. Yuta ends up helping Rikka set up a club, which he then unintentionally joins, and the two become friends despite Yuta’s constant annoyance at Rikka’s actions. Yuta falls into this trap where he likes Rikka and wants to help her but doesn’t ever want to be too close to her because of the fear of being labeled. The odd part is no one in his class seems to care that much about Rikka being a bit weird, other boys response to his relationship with Rikka is jealousy at getting attention from any girl. It quickly becomes apparent that most of Yuta’s fears are completely his own, created by his own insecurities. That factor plays in and forms the central theme of the show, which is not only to accept who you are but to accept others for who they are. It is a beautiful theme, one often seen in adolescent and adult romances alike but including it with the delusion hook of Chunibyo gives the message all the more power. 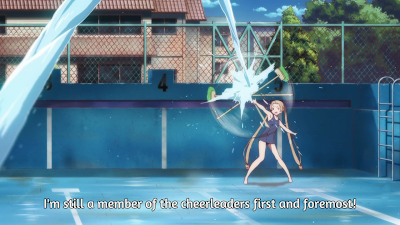 This comes to ahead when it’s unveiled at about the half-way point, the reason for Rikka’s delusions and the reasons why she immediately attaches herself to Yuta. There is no real surprise as to where the narrative goes, from the start of the show it’s clear this is a story about a broken person, it’s the depth at which she is broken and the fact that the show does seed reasons for her delusions and obsessions. Even pulling back from the tragic reasons for Rikka’s delusions, the flashback for when Yuta’s delusions began show a young boy with friends who are starting to be interested in girls and moving away from the games and stories of their childhood. In that moment is when Yuta’s delusions began, it was a coping mechanism for feeling different. Being out of place.

In the entire show the theme of delusion keeps coming back, from the obvious ones of Rikka but even in the character of Shinka Nibutani. I struggled with the purpose of this character for a good part of the show but she is there as a thematic anchor. She suffered from delusions as deep as Rikka’s when she was younger but now, attempting to break out of them, her new set of delusions are formed around her idea of a “normal high school girl.” She acts the way she believes she should, and she joins the cheerleaders only because that is what she thinks is expected of her. In reality she ends up hating her club and struggling to even know how she is supposed to act. The message of the show is that all of us suffer from delusions. Some of them are like Rikka where it manifests as a borderline personality disorder but most of them are much simpler than that. Delusions could come from acting how you feel you are expected to act, putting up a shield around your own personality because you fear being rejected.

While the show becomes profound and compelling, the first few episodes I found Rikka more annoying than 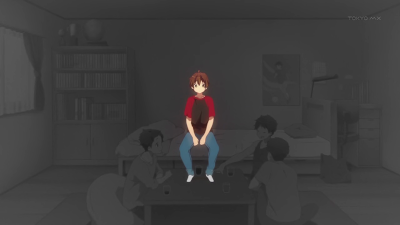 endearing, there is a trend in Moe anime where the early episodes relay on a hook in order to bring people in and Chunibyo definitely falls into that pattern. There was a moment into episode two where I felt the show was moving towards fetishizing the mentally ill. I think that might have been a rush conclusion, based the fact that Rikka was just being weird, but Rikka being weird that was the entire show for the first three or four episodes.  Also, most of the side characters fall flat for me. In the middle of the show half an episode focus’ on Yuta’s friend Isshiki who gets caught ranking the girls in his class. This just didn’t fit with the themes of the show. The anime only side character Dekomori gives Rikka someone to play off of, but she is ultimately redundant.

The most troubling feeling I got while watching the show is it seems overly abusive to Rikka. There is a slapstick trope in anime that when a character is acting overly silly, the other characters react by hitting them. When Yuta hits Rikka, mostly taps on the top of the head, an awful lot. Combine that with the feeling in the early episodes that she was seriously mentally ill and it started to make me feel uncomfortable. This comes to a head when Rikka faces down the wrath of her sister, whom she is living with. The first time the audience sees her sister she approaches Rika menacingly carrying a large spoon, Rika becomes visibly frightened and tries to fight back. 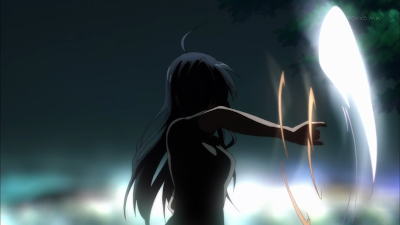 Then there is the second to last episode, where something occurs between Rikka and Yuta that made me want to stop. To give up. To write off the entire series. Yet even with all that which made me uncomfortable the series does end on a high note, lessons learned. Does it justify the emotionally traumatic and physically abusive moments in the show… absolutely not. Some of it I can forgive just because they are common anime tropes added without thought to how it would affect tone. But the event in the second to last episode nearly completely undid everything positive the show had accomplished up to that point. I’m not disappointed I watched to the next episode, but that may prevent me from ever going back and re-watching the series.

Chūnibyō Demo Koi ga Shitai ends up being an above average love story with a nice character arc between the two protagonists set on a backdrop of overcoming a part of adolescence which, ultimately, prevents young teenagers from progressing to the next stage of their lives. It has a sincere and effective message which carries serious weight. Unfortunately the early episodes end up being Moe non-sense with a feeling of fetishizing the problems of poor Rikka. Mix that with a lot of useless characters and subplots, slapstick comedy that is skewed by the serious tone of some of the scenes, and an upsetting event in the second to last episode the series was difficult to watch. There is a good narrative, a good theme, and great characters in this show. Unfortunately, they are buried under some of the more tedious aspects of Moe.