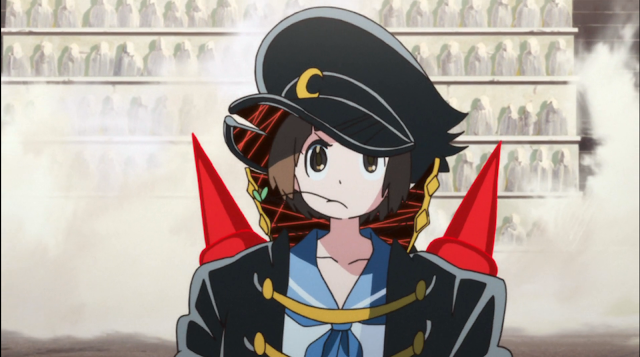 Conformity in anime is a common theme because the nature of the Japanese relationships to family and a structured class system. Even in the most mundane slice of life show having characters refer to elders with a special title creates a ridged class structure that the characters obey. There are some anime that tries to challenge some of the expectations of this class structure. The Melancholy of Haruhi Suzumiya challenges many normal anime tropes and structures included that social structure. Haruhi moves in and dominates her shy upperclassmen Mikuru. We rarely see a break in this kind of social structure.

Kill la Kill looks at all forms of conformity common to Japanese animation and gives them a giant middle finger. Our protagonist, Ryuko Matoi, walks into high school on her first day and makes a direct challenge to the social and political structures set in place. 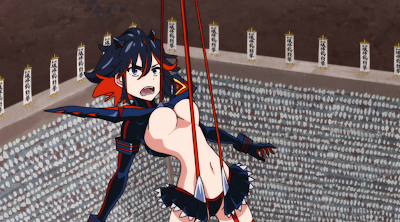 This is first illustrated by her uniform, which she acquires shortly into the first episode and becomes her weapon against the school. The uniforms in Kill la Kill have become a status symbol. Students who are high ranking are giving uniforms that grant them special privileges and powers. Students who have no ranking get a standard bland uniform. Ryuko walking into the school wearing a nonstandard uniform serves as a symbol for her challenge to the authority established at the school. By not wearing a uniform she is rejecting the ranking system the student council has put in place and exists outside the social order.

This theme matures during the battle between Ryuko and Gamagoori, in which Gamagoori discusses why Ryuko is a threat to the school and it’s current set up. When he becomes fed up with her during the battle he declares that he will, “end her independence and mold her into a model student.” Followed by calling her a slut for the appearance of her uniform during transformation. Gamagoori believes the act of modifying the uniform in any way a threat to the order to the school, a sign of independence and a mark of depravity that shouldn’t be tolerated. If Ryuko shows more skin than the chosen uniform than she is a sexual deviant and must be dealt with. 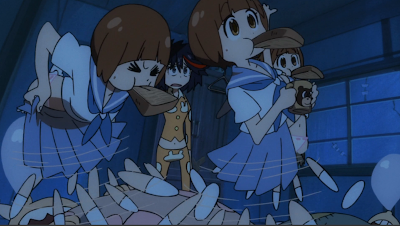 This also brings sexual standards into the importance of the uniform. A girl cannot be more or less “scandalously” dressed than the rest of her class if everyone is forced to wear the same uniform. Ryuko’s revealing transformation sets her apart sexually from the rest of the school as well. To the end, Ryuko is the only girl that anyone shows any sexual attraction to during the show. By the 9th episode the other female characters in the show are comic relief, Mako, or the fearsome antagonist, Satsuki Kiryuin.

The club system in Kill la Kill also serves to aid in its anti-conformist themes. Again, in The Melancholy of Haruhi Suzumiya the titular character is tired with a normal life and wants to live more interesting than the average high school girl but she still works within the rules of her school in order to create a club. She still feels like using the structure of the club system is required before she can successfully start her journey. That is the start of a great many high school anime. The characters want to start a club for whatever reason and they proceed to work within the school-designated rules of picking a topic, getting enough students, finding a teacher sponsor, ect.

Kill la Kill’s club system is an extreme version and the very core of the shows criticism towards conformity. The club structure is really how students become ranked in the school. Students gain rank if they are members of clubs, presidents of clubs, and if their club successfully brings glory to the school. By working within this system, students not only gain rank in the school but those benefits leak out into their personal lives. Students in high-ranking clubs get elevated into a higher class and their families are allowed to move out of the slums into a more gentrified area of the city. 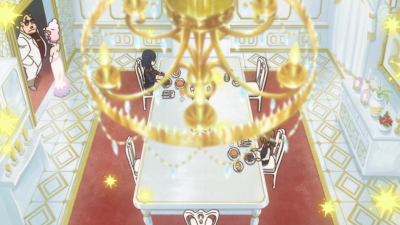 In episode 7 Mako, Ryuko’s only friend in this world and whose family has allowed her to live with them, becomes the president of the “fight club”, a club the two made up to take advantage of the system. Because Ryuko kept winning battles the club’s purpose was extremely successful and Mako’s family moved up from the slums into the richest part of the city. At the end, Mako is forced to fight Ryuko to keep her status and Mako’s once loving family cheers for Ryuko’s head.

Living within the social structure has had nothing but benefit for Mako and once her position is secured, she must destroy the threat to her comfortable life. Anything that threatens the social order must be destroyed.

The metaphor presented is so universal that Ryuko’s challenge to the student council can be swapped in with nearly any like conflict. The anime, I believe, is specifically tackling the monoculture of corporate business. But the student council’s reaction to Ryuko’s challenge reminds me of media companies’ rejection of digital technology and online distribution in the early 2000s. The status quo becomes the source of success and comfort, and any challenge to it must be squashed.

There is a fear that runs through the antagonists of Kill la Kill. They don’t want things to change; they don’t want their absolute rule to be overturned. They have developed a society in which one person controls the wellbeing of everyone under her. The scariest thing they can imagine is a person working against the system they put into place. Then Ryuko Matoi arrives and everything they built starts to crumble around them. In the battle of individuality versus monoculture, the individual almost always stands victorious.