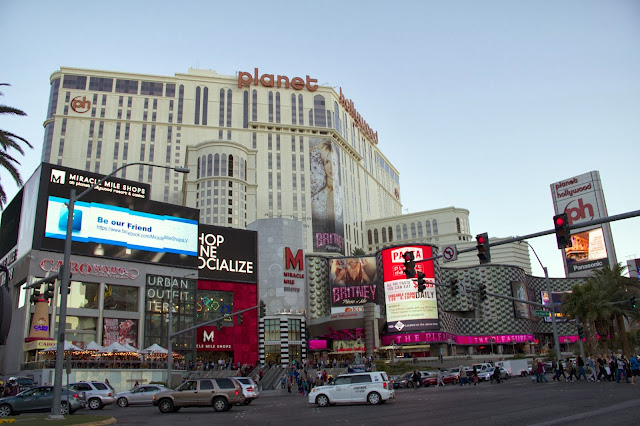 The Otakon name has a certain amount of weight associated with it. The name conjures images of a crowded Baltimore bristling with teenagers in cosplay trying to survive an oppressive heat. It brings to mind long lines, crowded hallways, and the biggest celebration of Japanese culture anyone could imagine. 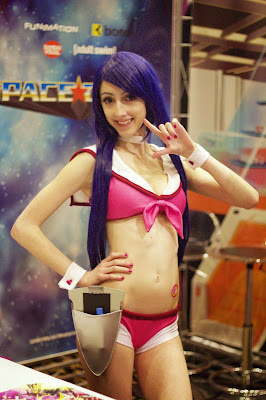 So when I walked into Otakon Vegas on the first day and saw a handful of people milling around the expansive hallways of Planet Hollywood’s convention center my first reaction was doom. No one knew how well the new Vegas counterpart was going to do in its first year but the Otakon name carries with it some weight that, apparently, means nothing on the west coast and did nothing to boost the numbers of what turned out to be a decent first year convention showing.

Maybe I was expecting too much. What Otakon Vegas always was is a way for Otacorp to expand and spend some of its profits to fulfill its mission statement. Being a non-profit company, Otacorp needs to get rid of its excess cash and it decided to do that the only way it knows how: throwing a convention. Otakon Vegas may just be the greatest excuse for a weekend in Sin City ever conceived.

While small, the programing was absolutely of the quality fans come to expect from Otakon. Otacorp took the time to bring in quality panelists like Mike Toole and Charles Dunbar to spearhead their new convention. Their effects felt like it may have been in vain because while all their panels were excellent, the panel rooms were at best only half full. The panel rooms were far bigger than required for a convention of Otakon Vegas’ size, but I’m used to Mike Toole panels at Anime Boston and Otakon being filled to capacity. Walking in and seeing fifty people in the room felt like a failure.

The highlight of the convention was the main events. The American Sumo event was engaging and entertaining. I learned a ton about Sumo while watching two of the best wrestlers in the world grapple and, more important, gained a newfound respect for the sport. I came out of the room feeling exhilarated. It was definitely one of the best events I’ve witnessed at an anime convention, the best non-anime event at least. The Space Dandy world premiere was also a ton of fun, but that was due to how excellent that first episode turned out to be rather than anything the convention did. Witnessing the world premiere of an anime that is most likely going to go on to massive success will mostly pay off in the future. 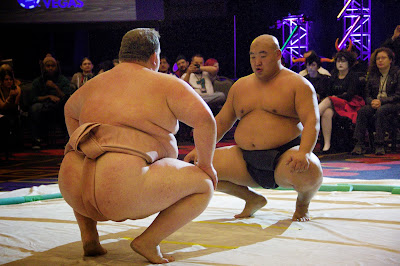 The biggest barrier to the growth of Otakon Vegas is going to be Las Vegas itself. Otakon’s standard audience back on the East Coast isn’t going to be able to afford the expensive plan flight out to Vegas every year, so Otacorp is going to have to rely on local attendees to start spreading the word. Of course, even without the flight Vegas is an expensive city. Hotel rooms can be had for under $50 if you know where to look but the city is a carefully designed trap to separate people from their cash. The average convention attendee being a poor fifteen-year old doesn’t bode well for the future of any anime event in Las Vegas. Food in the area is extremely expensive unless you want to keep going to the McDonald’s in the mall or the Subway down the street. The 24 hour buffet meal pass turned out to be a deal and I got four meals out of the $37 I paid for it. The buffet at Planet Hollywood is normally $20 a person, and the meal pass Otakon Vegas offered for $37 is normally $75. Vegas buffets are famous for a reason and the price was well worth it for the amount and quality of the food. The downside of the buffets is that you have to wait in line every visit and during peak traffic that could take almost an hour.

It is definitely a good excuse to go to Las Vegas, if you were planning a trip already, and it will keep you away from the casinos for a couple of hours. Where Otakon Vegas does have a future is in marketing to parents. What the convention can become is a safe and cheap space within Sin City where parents can leave their children with their friends while they go out and gamble. If the convention is able to push that message I see the convention having a bright future. If they fail to deliver that message than Otakon Vegas will always be a small con disguised as a tactic to give Otacorp staff a free vacation while spending money they legally have to spend.