Mobile Suit Gundam and its tie in line of model kits have always marched in lockstep. If the anime gets a cool new giant robot it wasn’t long before you were able to buy a kit and build the model of it. At this point Gundam has been around so long that the models, now being sold under the unified “Gunpla” brand, have taken on a fandom all their own independent from the anime franchise. Gundam Build Fighters is a transparent method to get kids and fans of Gundam anime into the culture of Gunpla and it certainly worked on me: after watching build fighters I’ve spent almost $300 on Gunpla.”

In the world of Gundam Build Fighters a new technology was created that reacts with the plastic in Gunpla and enables a person to control their plastic model with holographic controls. The Plavsky particle changes a flat service into one of a number of battlefields and gives power to the Gunpla’s weapons and propulsion systems. So when the Gunpla battle is occurring it’s no different from when mobile suits fight in the regular show… except in Build Fighters they are made of plastic and four inches tall. These particles have real effect on the world and Gunpla that loses in battle are physically destroyed.

The main protagonist is Sei Iori whose father took second place in the Gunpla Battle world championship five years earlier. Sei is an expert model builder but is horrible at battling. This is illustrated in the first episode when a punk kid who brings his own poorly made model into Sei’s store and is able to defeat Sei’s custom, beautifully built Strike Gundam. The kid wants to fight for Sei in the upcoming world tournament but Sei doesn’t believe that he will treat his Gunpla with enough respect. So there comes on final challenge, if Sei loses to, he has to let him fight for him in the tournament.

Which is here things get weird: Enter Reiji Asuna, who Sei saved from an angry 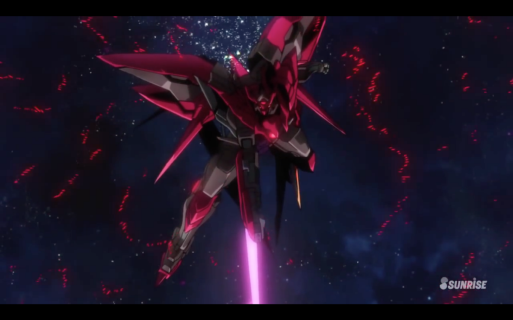 store keeper earlier in the day. The mysterious stranger gave Sei a stone and promises that he’ll come help when he is needed. So, Reiji appears and crushes punk in a swift Gunpla battle. Impressed, Sei recruits him to be his partner in the upcoming tournament.

From that point Sei dedicated all his free time to building the perfect Gunpla and Reiji, with the help of veteran Gunpla battler Rumbal Ral, hones his skills in combat and their combined effort allows them to advance all the way to the World Tournament. When the show enters tournament mode it becomes a great Shonen tournament show. Their opponents are fleshed out and have real motivation and depth of character, and every Gunpla battle is a high quality mech battle using customized versions of classic Gundam series mobile suits.
The most interesting among their opponents them is Aila Jyrkiainen, who is an orphan recruited by Team Nemesis in order to get their company a victory in the Gunpla tournament. She’s a reference to a bunch of cyber NewTypes from various Gundam series as she doesn’t really care about Gunpla Battle and uses a system that allows her to visualize the Plavsky particle, essentially predicting the future. Her arc comes fully formed when she realizes that she has more options than just being a slave to Team Nemesis and is taught how much fun it can be to build and battle your own Gunpla.

One refreshing aspect in Build Fighters is the relationship between Sei and his friend from school China Kousaka. Throughout the show their relationship develops like a normal middle school relationship. He isn’t scared of her, he isn’t overwhelming by the idea of a girl hanging out with him. They start to hang out as friends and slowly over the show they get closer and move from friendship into a relationship. She obviously likes him and he spends the vast majority of their time together talking about Gunpla, so she gets into Gunpla to be closer to him. It’s one of the more honest school romances I’ve seen in a recent anime. The show even acknowledges the existence of sex when a female character starts staying in the protagonists hotel room Sei’s mother quickly intervenes to prevent hijinks.

In The Simpson’s there is a satirical scene where the “How to buy action figureman” episode of “Action Figure man” is up for an award, obviously a satire ofcartoons that existed only to sell toys. Of course, Gundam is rich in political and character
drama on top of having cool robots, far from a franchise designed as a vehicle to sell toys. However, Build Fighters is a vehicle to sell toys. It isn’t even subtle about it, there are entire episodes of Gundam Build Fighters where characters browse the Gunpla store, admire the display models, and the main characters give advice on what would be a good kit to start getting into the hobby with, not just for one demographic but for children, girls, and everyone in between.

It’s effective and entertaining because Build Fighters does a fantastic job at actually teaching the audience what goes into building a Gundam model kit. They show you the tools needed, steps in the process, and how the more expert modelers get the fine detail out of kits. The main theme of the show, above everything else, is how wonderful it is to build Gunpla. There are scenes of happy families building together and deadly rivals, who are at each other’s throats during the tournaments, bonding over their love of Gunpla. It stops short of being an instructional video on how to build Gunpla, but it provides the audience with the knowledge needed to take that next step when launching into the hobby. 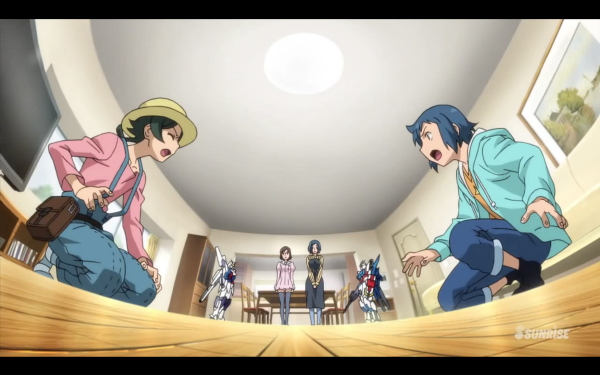 Inside Bandai’s commercial for Gunpla there is an honest theme of what beingpassionate about a hobby should mean. The characters who didn’t build their own Gunpla or who want to win without a true passion for Gunpla are all negative. The antagonist of the show becomes those who would profit from a hobby that Sei does only for pure joy. The characters who are corrupted by ideas other than love of Gunpla all get redeemed and learn of the joy of building Gunpla and all of them want to continue to build, not for victory in the tournament but for fun. The end theme is a bit of an irony and probably brilliant marketing for one wonderful fact:The show’s entire purpose is to profit off of Gunpla.

Still, I can feel true joy in the show. The people creating it love Gundam, all the small easter eggs tossed in and reused mecha designs are proof of that. Gundam Build Fighters transcends what should be an obvious ploy to sell toys and becomes a love letter to all fans of Gundam and the franchise that binds them together. Fans of Gundam and mecha battles in general will find a lot to love in this show but this also serves as a good entry point for non-Gundam fans because  the characters are so likable and the series has a lot of fun with it’s concept. Gundam Build Fighters is a triumph and a way to celebrate Gundam when you need break from the serious tone of the standard Gundam shows.