Yuri on ice was an immediate hit last season for a lot of good reasons. The characters were empathic and well thought out, the ice skating animation was gorgeous, and hints at a homosexual relationship in an otherwise standard sports anime lit a fire inside fans eager to see that narrative played in something that wasn’t pornography or boys love. But Yuri on Ice goes beyond just a normal love story between two men. It’s about people passionate about the sport they have decided to dedicate every waking moment of their lives too.

The core of what Yuri on Ice is about can be seen in the very first episode, the catalyst of the story where Victor decides to drop everything and go to Japan to train Yuri. Yuri has been studying Victor for years, attempting to follow in his footsteps. He has followed his career and even got the same type of dog as Victor. Yuri very much has built his career as  a figure skater, his entire life, after Victor. When Victor saw Yuri skating he wasn’t just watching another skating copying one of his routines. He was watching someone who had studied that routine with passion and who was recreating it out of pure love for the art form and for the person who had developed it: Victor. Up to that point Yuri was a talented skater but he lacked a goal, he lacked passion. Yet when he wasn’t competing, when he performed alone for his friends on that ice rink he preformed a master level routine with elegance and style.

Victor, as Yuri’s coach, doesn’t improve his physical skiing ability. Victor unlocked the element that Yuri’s skating lacked: Love. Victor saw love in Yuri’s performance on Youtube, he saw the potential that Yuri could unlock if motivated correctly, and so he was inspired to create the routine for him based on On Eros to help Yuri discover that passion.

Yuri on Ice is not a compelling simply because of the existence of an adorable homosexual relationship, it drives much deeper than that. It’s an exploration of what love is and what it means to be in love. The commitment that Yuri and Victor make is based around the powerful forces of competition. Their relationship is contingent on both of them expressing their love on the ice. Whatever they feel for each other is an extension of their individual careers. Victor gets to have a partner who fully understands him, someone he can be his true self with and Yuri gets to act out his desire for, what he has come to define as, the vision of a successful skater.

There is a struggle with trying to define what their relationship is to each other in words because of how well it is expressed in the show. The progression of the relationship as the show goes on is beautiful, moving slowly from the idea of a homosexual relationship being novel to it simply being the truth of the narrative. The proof of the love the characters share comes out in the final few episodes, not only in Yuri’s forgotten confession towards the end but also in the dedication to each other. Victor’s love is skating, it consumed his world for his entire life. Stepping aside to be with Yuri is the only evidence the narrative needs to show how deeply and profoundly Victor feels for Yuri.

Yuri is fighting a battle against himself at the start of the show. He is a world class athlete 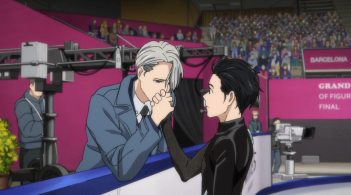 but, while he reached the ultimate competition of his sport, he can’t show the final bit of skill needed to actually compete against his peers. Victor’s arrival gives him the last piece he was missing: a reason to skate. He hides it by the incredibly silly notion that he was expressing his love for a Port Cutlet bowl but in truth his love was always for Victor.

The concept of love is what is up for reexamination in Yuri on Ice. Love by definition is nebulous. It’s a feeling, feelings don’t normally lead themselves well for translating into words. There likely has been no other subject  that has been more examined by the great writers and thinkers of the world. Still, Yuri on Ice accomplishes something that is unique. By combining the homosexual relationship alongside with the characters defining love in their skating we see the message of Yuri on Ice form: love can come from mutual respect and goals. The depth of Victor and Yuri’s love is as deep as their love for skating because in each other they see the same work and dedication they individually put into their craft. Their love of each other is their love of skating. The two are irreversibly linked.

I could dwell on the dozens of details that defines their relationship and how deeply these two characters love each other. But that might hurt the magic of the show. What makes the show so compelling and beautiful is watching these details slowly come to light. Watching Victor and Yuri’s relationship evolve from novel slapstick to one of the most sincere love stories is a joy. The magic is in the small details. The way the characters look at each other. The way they skate and they seek out reasons for taking to the ice. They found a reason to be on the ice, for everything on the ice is called love.