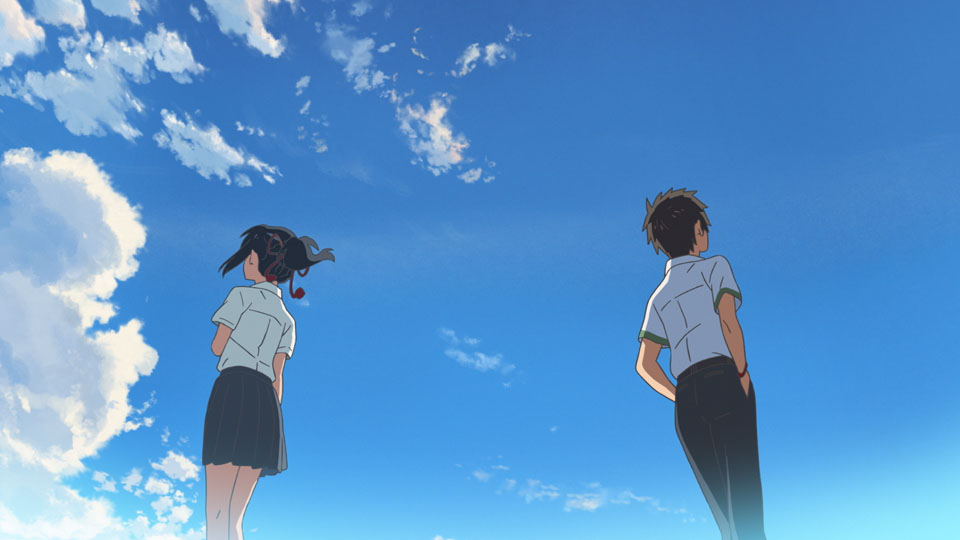 The newest film from acclaimed director Makoto Shinkai, Your Name, follows two teenagers on the edge of adulthood. A boy from Tokyo, Taki, wakes up in the body of country girl Mitsuha and back in Tokyo Mitsuha has taken over the body of Taki. The changes occurs randomly and last one day, forcing the teenagers not only to deal with their own problems but also the issues of their counterpart across the country.

Shinkai enjoys taking his time in a film. He wants to give the audience a complete picture of the world, show them scenes from that world so the audience gets a vivid sense of how the character lives. In Your Name he employs this by the time he takes with each character the day of and after their first possession. But his use of photo realistic art also grounds the film in the reality of the characters and situation. Shinkai establishes time and place through the art, taking time to show elements of each character’s lives to ground them in their respective world.

We see Mitsuha’s world revealed slowly. Her relationship with her friends and their 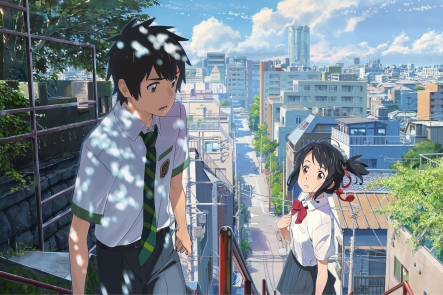 feelings towards the town, her dreams of going someplace bigger where there are cafes and good jobs. Her life as a shrine maiden, the rituals she has to perform, and the way her classmates react to the ancient display of Japanese religion and culture.

Shinkai’s world view about rural Japan and Mitsuha’s role in the world is laid bare by a story that the Shrine Priestess, Mitsuha’s grandmother, tells the young girls. At some point in the past a fire destroyed all records about the shrines role in the town. No documents of the rituals exist any longer. So while the actions of the rituals have been past down what their origin is and what they mean is lost.

This idea of meaninglessness in the rituals of the shrine is reflects how Mitsuha sees them. While she commits to them in order to make her Grandmother happy she has no interest in the shrine. She wants to leave this small town and go into the world. The small town represents a dying worldview, a place in Japan that still retains some of the isolationist mindset of the past. The people there aren’t advancing, aren’t changing with the rest of the world, the town isn’t attempting to draw young people in by changing to adapt to modern culture. It’s a dying world with people who are stuck, unmoving, as the rest of the country advances. They no longer know what their role in the world is, they just keep living the life they’ve lead for hundreds of years without thinking.

In contrast, Taki’s life seems glamorous to Mitsuha even though the realities of the city aren’t comfortable or convenient. In fact some of the things that Mitsuha encounters in Taki’s body are downright terrifying and completely alien to the country life she was brought up in. Taki’s commute to school is enough to completely disorient Mitsuha, Taki’s job filled forces her to interact with strangers, a concept that she rarely encounters in her town of a thousand people. It’s hard to believe that she has the skills to cope with the situation. But she does, in a wonderful way. She adapts and starts to become who she needs to in order to fill her new role. As the changes continue they both end up sliding right into their roles in their new world. 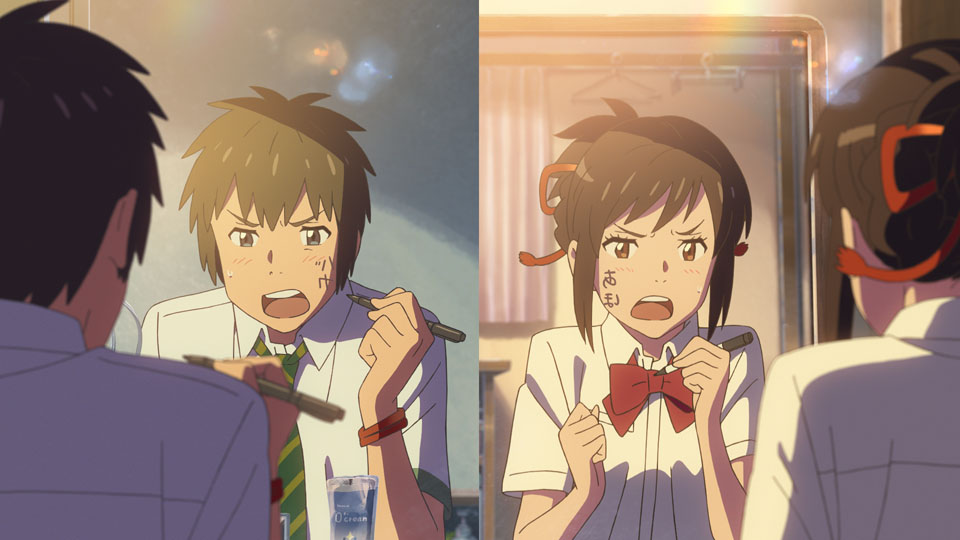 Perhaps that’s the greatest take away from Your Name. These young people are thrown into situations that are completely alien and yet they adapt and change to fit that situation. Shinkai throws them into worlds that could not be more different than the one they’ve grown up in. Opposite gender, opposite setting, and a completely different set of expectations. Yet they both dive into their roles with zeal and manage to come out better for it. This is an analogue to growing up as a whole. As children, everything is taken care of for us. It’s only when we enter adulthood and start to make our own decisions that who we are starts to take shape. This is an extreme example of that coming faster than anticipated. Mitsuha’s dream of moving to a big city and escaping from her home town comes in a realistic dream, a precursor to her coming of age and making the giant leap forward required to actually leave her home, family, and friends behind to start her life anew.

of Your Name. Shinkai successfully builds the relationship between them without them ever actually seeing each other in person. Yet, they possess each other’s bodies and live each other’s lives. They get to know each other’s friends and by living through that experience each come out better for it. It’s impossible not to be shaped by sharing that level of intimacy with someone, in fact there can be no analogue to the level of intimacy that they’ve shared.

Shinkai manages to put a lot of detail into a small amount of time combining his stunning character animation with his use of montage and well timed music to fit a lot of detail into a small space. Your Name is a complicated film that continues to become more complicated as it goes on, at each point Shinkai changes what the film is about is graceful, tying together all the arcs of the film into one continuous tapestry.

I love this movie. I’m not trying to hide it. I have very little to bad to say about it. I would have liked to see more about each character, I would have loved an extra scene that fleshed out their lives. There were also a few times I think Shinkai could have made the narrative a bit clearer. Introducing the concept of the film felt a little clumsy until it was well established and the largest plot device, that these body switches felt like dreams and were ephemeral, was mentioned briefly and then hardly followed up on when the concept was paying off. These are minor issues that shouldn’t affect the film as long as the viewer is paying close attention.

Makoto Shinkai has been criticized as telling the same type of stories over and over again. I can definitively say that Your Name is his masterpiece. It’s the movie he’s been trying to make for the last ten years and he finally hit his mark. It’s a mature piece of work by a now mature animation Director. I think Shinkai could have gotten to this point sooner had he been brought up as a traditional anime Director but since he was self started, he didn’t have the benefit of experience. He has that experience now.

Going forward Shinkai should leave his favorite theme, relationships through distance and time, behind. He made several pieces of animation about it. He played with it in different genre’s. He ran it through it’s course and perfected it. This is the culmination of one man thinking about a single theme for a long time. It if takes another fifteen years and four great but lacking films to get to his next “Your Name”, that time would be well spent.