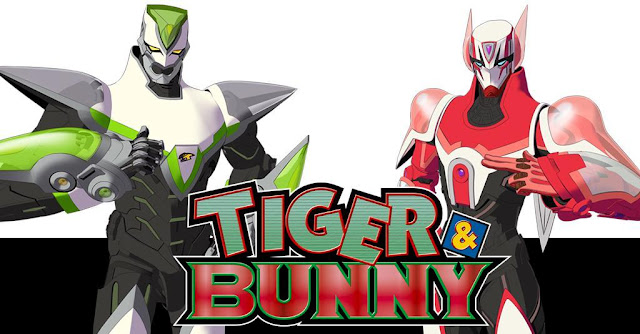 Superheroes are a traditionally American trope but as Japan is trying to grow their shrinking animation market they’re making more attempts to appeal to American sensibilities. The first attempt in resent years to create a superhero anime set in America was Heroman, which failed because it felt like anime tropes shoved into an American superhero story. Tiger and Bunny comes from one of the most famous Japanese animation companies that still exist, Sunrise, and is helmed by a man who has worked on Gundam and other serious mech shows. Using talent that has created some of the most memorable Japanese science fiction they have crafted a series that is not only a capable superhero narrative but an exception example of the genre. In a alternate reality filled with NEXT, people with superhuman powers, Wild Tiger is a veteran hero who has been dropping in the rankings of the reality show “HeroTV.” His contract is sold to a new company where he is forced to pair with the rookie hero Barnaby Brooks Jr. The pair has to learn to work together to take down the criminals of Sternbild, gain enough points to win HeroTV, and track down the terrorist organization responsible for the murder of Barnaby’s parents. 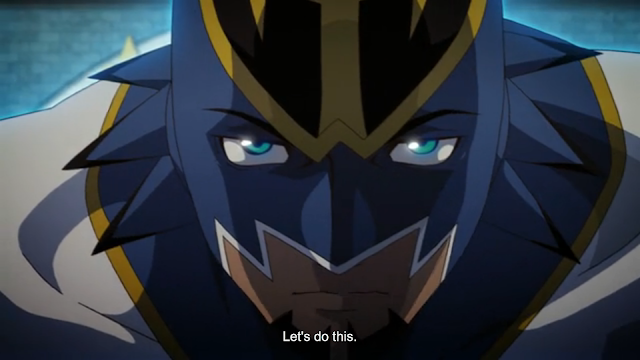 The first thing viewers will notice about Tiger and Bunny is their approach to superheroes. The audience is introduced to the heroes through the commentators of HeroTV as they attempt to apprehend a suspect. This first episode enables the audience to quickly learn the main cast and what their individual powers are but it also fills in a lot of world detail that is required going forward. The television aspect of the show makes a whole lot of sense when attempting to create a realistic superhero narrative. With some exception, it takes a lot of dedication and selflessness to go out at night and capture thugs for free. Now if you could monazite the effort without giving up your actual goals than it becomes a way to make a decent living. The sponsorships fall into the same category, superheroes need equipment and want to make money on the side just as much as athletes. There is no reason why they shouldn’t leverage their visibility in a mutually beneficial sponsorship. It may sound cold and greedy, but it’s the way our world works.

Tiger and Bunny is a show about a partnership. From the second episode onward the show revolves around the relationship between Kotetsu and Barnaby, the charm and humor of the show comes from their banter and growth as a team. The personality of the characters clash beautifully with the stoic Barnaby constantly being annoyed by the carefree and impulsive Kotetsu. Watching the two of them conflict and grow is a real treat. The constant conflict works as a mechanism to get some serious character development. The amount of trust that the two put into their partnership and what they decide to share with each other tells a lot about how the character thinks and what they think of their relationship with the other. Due to the amount of time the show uses to distinguish the personality types the moments when the two come to a point of understand are all the more profound. 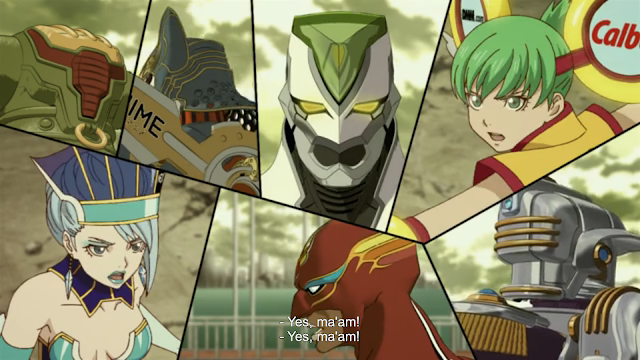 Tiger and Bunny uses a team style of superheroes making them both rivals and comrades, which creates a great dynamic among the group. All of the heroes have varied powers which fall into the general pantheon of superhero abilities such as, flight, electricity, fire, and ice. Tiger and Bunny doesn’t do anything new with these abilities either, but the abilities of the heroes quickly fall into the background to allow their personalities to shine. Throughout the series most of the heroes get their own character building episode which gave each of them some serious depth. My favorite being the one where Dragon Kid has to deal with her issues with femininity, her relationship to her parents, and to protect the Mayor’s NEXT baby. The episode hit it’s beats perfectly allowing the audience to understand Dragon Kid in only twenty minutes on top of presenting an interesting story, bringing us two NEXT villains, and fitting in plenty of banter between Tiger and Bunny. The development of the side characters gets perfectly integrated into the episode. 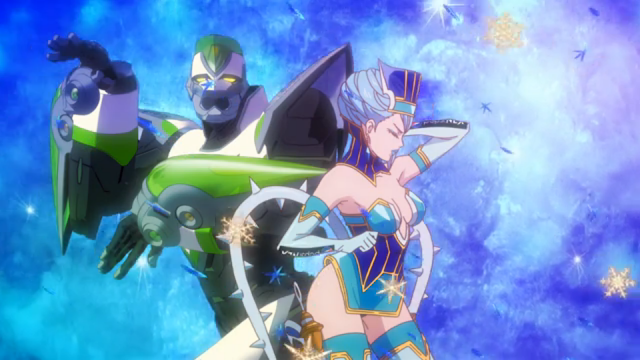 The animation in Tiger and Bunny is a great combination of CGI and standard animation. The character designs look more like aclassiclate 1990s style with a little modern influence. The mix of different styles in the main cast highlights the varied nationalities of the Heroes, having been recruited from all over the world to be on HeroTV in Sternbild. The clothing the characters wear is a combination of realistic and a reflection of their personality. Dragon Kid wears a one piece track suit when not in her hero uniform which highlights her reluctance to explore her feminine side which serves as a nice foil to the extremely fashionable Blue Rose. The same rule applies to their hero costumes, with the added bonus that the costumes have motifs based on their abilities. Fire Emblem, an eccentric homosexual, dresses the part when out of costume while his costume is standard superhero garb with the addition of sequence cape to give it that extra flare. Tiger’s dress is especially telling of his role in the series. His casual clothes are a dress-down formal shirt and pants with a vest and matching hat which gives him an old worldly appearance. His superhero uniform, before getting an upgrade, looks handmade when compared to the modern equipment used by the rest of the cast. The audience knows immediately that he belongs to a pervious generation of heroes. 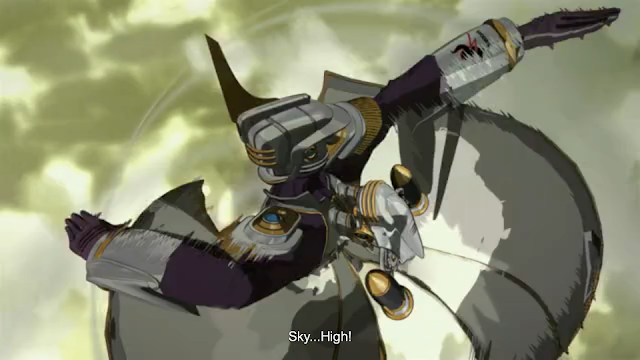 Narratively Tiger and Bunny consists of a good number of episodic stories, most of which designed for character development as I explained above, but the show soon smooths out into two large arcs surrounding Barnaby’s quest for the man who killed his parents. This brings the heroes up against a super villain NEXT which tests the limits of Heroes, who are used to chasing thugs, and helps to break Barnaby of his stoic personality. The second half of the series starts off by laying groundwork for a much larger narrative which incorporates at least four threads started in one off episodes, naming any of them would be too large a spoiler, and weaving them together for a fantastic climatic payoff that is surprising, suspenseful, and overwhelmingly emotional.

If the show wasn’t dense enough one more layer is spread throughout, the concept of justice. This manifests itself in the non-hero, non-villain Lunatic. Lunatic is an extremely powerful NEXT, so powerful that even Tiger and Bunny combined can barely match him, who wants vengeance against criminals. Not content with simply capturing them he gets in-between heroes and their targets to murder the suspect before the heroes have a chance to arrest them. This brings a Death Note-esq question of Justice into the mix. Lunatic himself gets his own character episode which somewhat justifies his rather extreme method of dealing with criminals. At least I found myself being sympathetic towards him. The show does a wonderful job of painting him as neither good or evil, simply a force that dishes out “justice.” 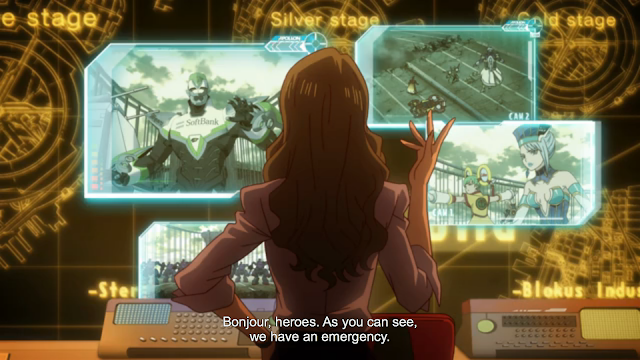 I do want to talk about emotions for a moment, even though this is an extremely subjective topic. I do get emotional easily because I tend to completely invest myself in the characters. Tiger and Bunny, an anime about superheroes, had me emotionally moved in more than one occasion. Not even in large moments or big character events, although I wept like a child through those, but just during epic moments caused by characters working together or going through some pain. I loved these characters and falling in love with them happened extremely quickly. In the second half of the series I was completely hooked on all of the characters and wanted to know more about each of them. It still shocks me how much I’ve become attached to them. The character development is so perfectly mixed in with the narrative that attachment sneaks its way into the audience.

With all the praise I’m tossing on the character development it’s a shame that some characters didn’t even get their own episode. I barely know anything about Fire Emblem or Rock Bison other than the small facts learned through their conversations with the other heroes. The writers went to the trouble of giving the four other heroes screen time but perhaps just ran out of space in what does become a dense and complex narrative. If a sequel comes, I’d hope that they move away from the personal stories of Tiger and Bunny and give the rest of the cast a larger role. 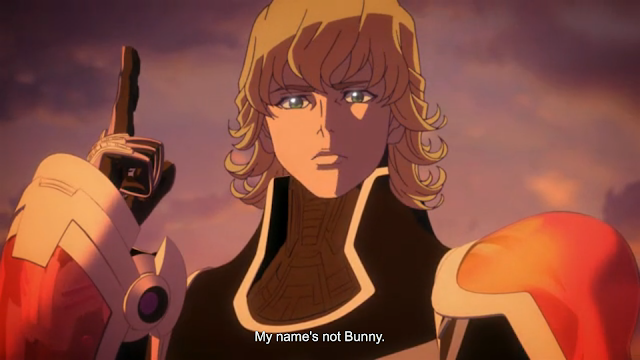 While the main characters are expertly crafted the villains of Tiger and Bunny are flat. The villain of the first half wants to create a world ruled by NEXT, a plot taken right out of the Xmen except with less magnets, and will ruthlessly kills civilians just for the fun of it. This doesn’t make for a compelling villain, although from him we got some good character drama with the heroes because they were forced to battle him one on one and for the first time faced serious danger. Even so, his own personal story or reasons are only explored on a surface level and leave much to be desired. The villain of the second half of the series has a more complex reason for committing his crimes, but becomes cartoonish through the effort of covering them up. He goes from a respectable person who seems to have genuine emotions and becomes a complete psychopath at the drop of a hat. Granted, that is probably the definition of a psychopath but his actions in supervillain mode completely came out of nowhere compared to who the audience knew him as perviously. If there were a few more clues leading to the reveal that might have been forgiven, but as it stands his switch form honest man to supervillain just doesn’t ring true.

The ending also stumbles, following a classic mistake in anime. After everything wraps up in a satisfactory way and has some closure it’s undone so Sunrise can insert a little afterward which reverses the ending and winks to the audience that more Tiger and Bunny is possible. If Sunrise wants to make more Tiger and Bunny I welcome it but if they don’t then this ending will forever ruin a chance to put a nice bit of closure on an otherwise fantastic series. 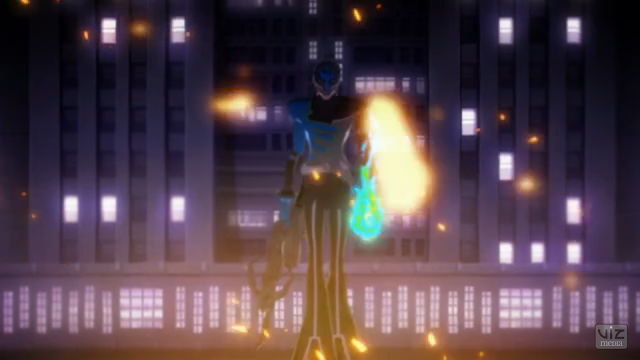 It’s rare that Japan produces something so perfect for a western audience but I think finally they’ve completed a masterfully constructed superhero story filled with complex plots, amazing action, and deeply moving character drama. What few flaws there are could be blamed on the genre they’re working in rather than any shortfall on the creators part. They’re playing with tropes well established in the west and almost brand new to them, so a fumble or two is understandable. I believe that Sunrise has created a group of characters and, more importantly, a world that has the potential to rival any of the currently sitting Superhero or anime franchises. I’m looking forward to a second season and hope for many more after that.